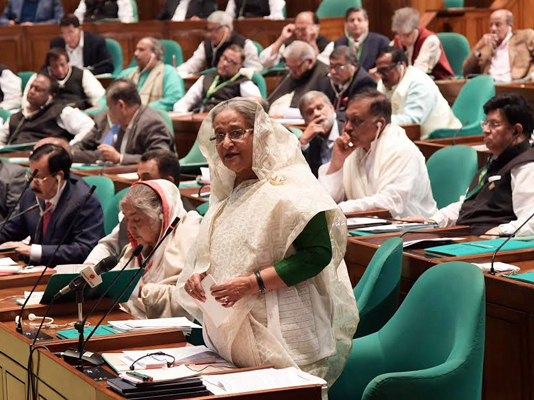 Prime Minister and Leader of the House Sheikh Hasina today welcomed the criticism of the government from the
opposition in Jatiya Sangsad saying that it is crucial in democracy.

“In the trend of democracy, criticism is very important. So I can assure
those who are in opposition in parliament can make criticism of the government
… we will not create any barrier to this end,” she said.

“We didn’t create any obstructions to the criticism of the government in
the past and we will not create any barrier also in future,” she said.

Sheikh Hasina said it is her responsibility to look into the rights of all
members of parliament.

The prime minister requested the Speaker to look into that the treasury and
opposition members get equal scope in parliament. “I’m assuring that we will
extend all kinds of cooperation,” she said.

The Leader of the House said democracy takes a country towards the path of
development and it is proven truth in Bangladesh.

Sheikh Hasina said the people of the country including the mothers, sisters
and young voters spontaneously took part in the last general elections. “This
parliament has been established through a successful election and I thank and
express gratitude to all for it,” she said.

The premier also vowed to protect the interest of the people and maintain
peaceful environment in the country, saying that the parliament members will
have to perform their responsibility keeping this in mind.

“We are the public representatives as we were elected through their vote.
So we will have to give attention so that Bangladesh is established as a
developed and prosperous country free from militancy, narcotics and corruption
and the peace and security of the people are ensured,” she said.

Sheikh Hasina said Bangladesh has graduated to a developing country due to
its tremendous socioeconomic uplift over the last 10 years. “Maintaining this
trend, we will build a hunger and poverty-free Sonar Bangla as dreamt by
Bangabandhu Insha Allah,” she said.

The prime minister said the Awami League government has been able to keep
up the continuity of democracy by crossing many hurdles.

“We were elected again in parliament and we must take Bangladesh forward by
fulfilling the hopes and aspirations of the people — it’s our aim,” she said.

The Leader of the House extended her heartfelt congratulations to Dr Shirin
Sharmin on her reelection as the Speaker of parliament. “You conducted
parliament efficiently twice in the past and you’re elected speaker for the
third time,” she said, wishing her success in her new term.

At the outset of her speech, the prime minister paid tributes to
Bangabandhu, the four national leaders as well as three million martyrs and
two lakh mothers and sisters who made supreme sacrifice for the cause of
independence.