President, PM urge all to join movement for safe food 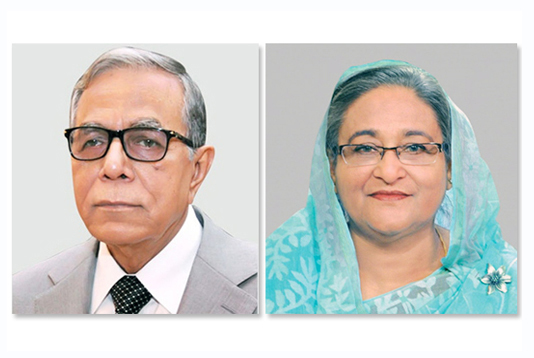 In his message, the president said he is delighted to learn that Bangladesh Food Safety Authority is going to observe National Food Safety Day tomorrow for the second consecutive year.

“The theme of the day this year “Sustho-Sabol Jati Chai, Pushtisommoto Nirapod Khadder Bikolpo Nai” (Need a Healthy Nation, There is no Alternative to Nutritious, Safe Food), which is very time-befitting… For being enlisted as a developed country, nutritious and safe food is very important,” he said.

The President laid emphasis on nutritious and safe food for ensuring public health as food contamination is a threat to human health, which may cause diseases like cancer, kidney failure and disabilities.

“It is very important to make people aware about safe and nutritious food. The present government is working to implement various programmes to develop public health, ensure availability of nutritious food, medical facilities, health education and developing sanitation system and the declaration of the 2nd February as the National Food Safety Day is a time befitting step,” President Hamid said.

Emphasizing on creating awareness among the people, the President said there is no alternative to the availability of nutritious and safe food.

He wished the day’s programmes a success.

Prime Minister Sheikh Hasina, in her message, reiterated her government’s commitment to safeguard the health of the people.

She said the theme of the day this year is time-befitting. The present government has undertaken various plans to ensure food safety and availability of nutritious and safe food, she added.

“Bangladesh has achieved self-sufficiency in food production and the government is working to implement various programmes to ensure special security in producing, marketing and supplying food. We have formulated The National Food Security Act 2013 and established Bangladesh Food Safety Authority in 2015,”she said.

“Issues like food safety, health and nutrition have been given special priority in Sustainable Development Goals declared by the United Nations. In line with this, the government has kept the matter in its 7th Five Year Plan and set a target of ensuring safe food for its people. The present government is working relentlessly to achieve this target,” the Prime Minister added.

She said Bangladesh is now the role model of development and moving forward to become a middle income country by 2021 and developed country by 2041 by achieving the economic growth.

“We have to move united for achieving these goals and need a healthy future generation for this. So, there is no alternative to food safety and nutritious and safe food,” the Prime Minister added.