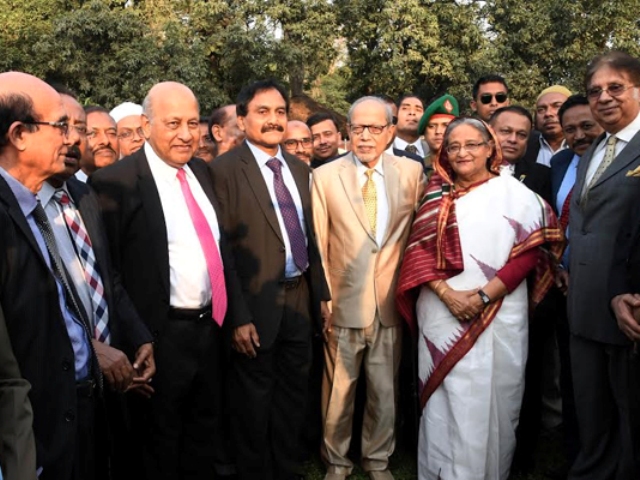 Prime Minister Sheikh Hasina today hosted a tea party for the leaders of political alliances and organisations who joined the prime minister’s dialogue before the last general election.

Sheikh Hasina, also the Awami League president, hosted the tea party for them at the South Lawn of Ganabhaban, the official residence of the prime minister, here this afternoon.

The prime minister arrived at the venue at 4:10 pm and exchanged
pleasantries with the leaders.

She went round different tables set for the guests, talked to them and
enquired about their well-being.

1 of 10
The lush green south lawn of Ganabhaban was tastefully decorated with kure ghar, mat, mora and earthen pots, while patriotic songs were played on the occasion.

AL General Secretary Obaidul Quader, on behalf of the prime minister, later
thanked the leaders of the political alliances and organisations who joined
the premier’s tea party.

“You joined today’s function spontaneously and your presence is very
encouraging,” he said.

Quader, also the Road Transport and Bridges Minister, said: “We didn’t only
exchange pleasantries, we also shared views on different issues including
political ones alongside having winter cakes.”

Regarding the prime minister’s invitation to the tea party, the AL general
secretary said: “I hope that you felt well at the good initiative of the
prime minister.”

Quader said the political leaders joined the prime minister’s dialogue at
Ganabhaban before the December 30 polls and held open discussions with the
premier.

“At the end of the election, we seek your cooperation and the prime
minister wants to fulfill her electoral pledges that she made before the
nation word by word,” he said.

The AL general secretary said: “On behalf of our leader, I sought your
active cooperation in this regard.”

The prime minister held dialogues with the political parties at her official Ganabhaban residence from Nov 1-7 ahead of the 11th parliamentary elections held on December 30.