Washington, Beijing all smiles on trade but doubts persist 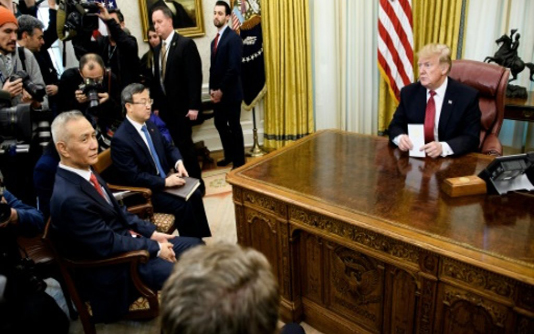 The United States and China radiated positivity after this week’s trade talks but doubts persist about the chances
of sealing the overarching deal Donald Trump wants.

After two days of high-level negotiations in Washington, President Donald
Trump hailed the “tremendous progress,” and the Chinese delegation said the
talks had been “candid, specific and fruitful.”

Beijing also offered to increase its imports of American agricultural,
energy and manufactured goods as well as US services as a gesture that it is
willing to open its markets — one of the key US demands.

More important still, Trump announced he and his Chinese counterpart Xi
Jinping would meet “in the near future” to bury some of the more difficult
bones of contention in person.

The prospects of a Trump-Xi meeting “substantially raise the odds of a
deal that gives the US at least a partial victory,” said Eswar Prasad,
professor of trade policy at Cornell and China specialist.

Given the tight deadline imposed by the 90-day truce — leaving them just
a month to reach a deal — analysts say it is not realistic to expect more
than a partial agreement with modest objectives.

But the US side has more far reaching objectives, and demands China end
its unfair trade practices, including the alleged “theft” of American
technological know-how, including forced transfer of intellectual property,
hacking, and massive state intervention in markets.

While Trump insisted this week he would only sign a “real deal” that
addressed these grievances, Washington could bump up against the soaring
ambitions Beijing laid out in its “Made in China 2025” strategic plan.

Launched a little over three years ago, the plan aims to make the Asian
giant a global leader in crucial emerging technologies like artificial
intelligence and alternative-energy vehicles.

For China, meeting Washington’s demands would amount to altering its
economic strategy and lessening the role of the state in the economy,
something Western analysts say is unthinkable.

Beijing “has identified a whole range of industries that are strategically
important and they want to use all the resources of the state to ensure that
Chinese companies excel and become world leaders,” the American Chamber of
Commerce in China said in a statement.

Still, some Chinese experts say Trump’s demands are not totally out of the
question.

Compared with other possible demands, such as greater press and Internet
freedoms and labor rights, “his list of structural reforms is only a minimal
plan of action,” Wu Qian, a lecturer in political science at Tsinghua
University, told AFP.

The two countries should be able to strike a bargain, or at least a
preliminary agreement, he said.

But for the moment, “there is little evidence of any serious progress,”
said Edward Alden, a trade policy analyst at the Washington-based Council on
Foreign Relations.

Alden said US Trade Representative Robert Lighthizer faces an even
trickier task as Trump has described the expected accord as “by far the
largest trade deal ever made.”

The American president has set “considerably” higher expectations for
Lighthizer by calling for an historic achievement, Alden said.

And by taking a central role, with a summit expected by the end of next
month, Trump is likewise created a perilous situation for himself.

Should the final product fall short of his express ambitions, Trump could erode support from his political base and “there will be a tremendous negative market reaction,” Alden said.