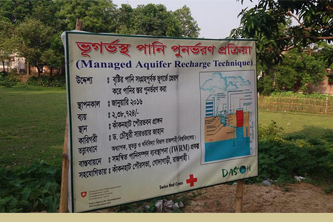 Optimum aquifer recharge in the high Barind tract is very important to protect its overall public health alongside the
existing agricultural ecosystem through managing a groundwater basin efficiently and effectively.

The drought-prone area is turning into an extreme drought zone owing to
scarcity of water due to the adverse impact of climate change and other
environmental degradations.

Prof Dr Chowdhury Sarwar Jahan of Department of Geology and Mining at
Rajshahi University says promotion of managed aquifer recharge can be the
vital means of halting furthermore declining of ground water level in the
high Barind area.

He said time has come to create awareness to halt the alarming declining
of ground water layer. Aquifer recharge activities should be promoted at
household level side by side with various institutions and industries
artificially.

Shafiqul Islam, a farmer of Kadigram village under Kakonhat Pourasava in
Godagari Upazila, has arranged aquifer recharge system in his house.

He is harvesting rainwater from around 3,000 square feet rooftop area of
seven rooms through 4-inch diameter PVC pipe and conserving those in tank
constructed with one-foot height and three-feet diameter six concrete ring
slabs.

Farmer Islam is using the conserved water for household purposes through a
tap fixed in lower part of the tank. Surplus water is being conserved in the
recharge tank through another upper portion wide pipe. After filtering there
the stored water is being injected into 140 feet underground sand layer.

The IWRM project is being implemented in drought affected 35 union
parishads and three pourasavas in Rajshahi, Chapainawabganj and Naogaon
districts since 2015 by DASCOH Foundation and Swiss Red Cross with financial
support from Swiss Agency for Development and Cooperation.

The mills extract huge underground water every day through 120 deep tube-
wells. For this reason, the nearby tube-wells became non-functional. So,
Jhilim UP Chairman Tasiqul Islam has taken necessary initiative so that all
the auto rice mills can send their rooftop rainwater to ground water layer.

UP Chairman Tasiqul Islam has a farsighted plan of aquifer recharge
through sending rainwater of 25 lakh squire-feet rooftop area of all 32 auto
rice mills and he intends to materialize his dream.

Prof Sarwar Jahan opined that the overall experiences of the first ever
promoted technology may prove that it could be a positive option to serve as
a context specific water technology for the drought prone region.

He says there is no alternative to conserve the ground water alongside
boosting the aquifer recharge for uplifting the living and livelihood
condition of the Barind tract.

He also said in addition to creating mass awareness about reasonable use of
both surface and ground water, emphasis should be given to integrated water
resource management for reducing the pressure on groundwater in the drought-
prone area.

Prof Chowdhury placed emphasis on a proper management of the existing water resources to protect the region from ecological degradation for the sake of safeguarding the ecological balance along with survival of all living beings.