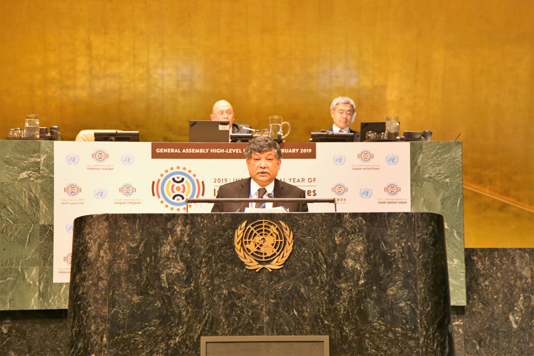 Bangladesh is committed to promoting inalienable right of people across the globe to their mother languages as well as the importance of linguistic and cultural diversities.

Permanent Representative of Bangladesh to the United Nations Ambassador Masud Bin Momen has stated this yesterday at a High-Level plenary meeting of ‘the General Assembly for global launch of the International Year of Indigenous Languages’ here.

“The spirit of the sacrifice of our sons of the soil to uphold their mother tongue on 21 February 1952 drives us in our unwavering commitment to promoting inalienable right of people across the globe to their mother languages as well as the importance of linguistic and cultural diversities,” he said, according to a release received here today.

Referring to the UNESCO declaration the 21 February as International Mother Language Day, he said, “It was due to Bangladesh’s initiative” since then.

Mentioning Prime Minister Sheikh Hasina’s commitment to build an inclusive society in Bangladesh strides towards peace and development, he said, “We are working to preserve and promote the identity, languages, culture, land and resources of our own ethnic minorities.”

Masud said, “We have ensured that in our various relevant acts, policies and programmes as well as development planning and endeavours, their rights are protected.”

Citing examples of different activities of Bangladesh government to this end, the ambassador said, “We have set up seven specialized cultural institutes including three in the three hill districts that will facilitate promotion and preservation of culture, heritage, languages, and tradition including that of small ethnic communities. We have an ‘International Mother Language Institute’ which is fostering research and scholarly activities for the preservation of languages.”