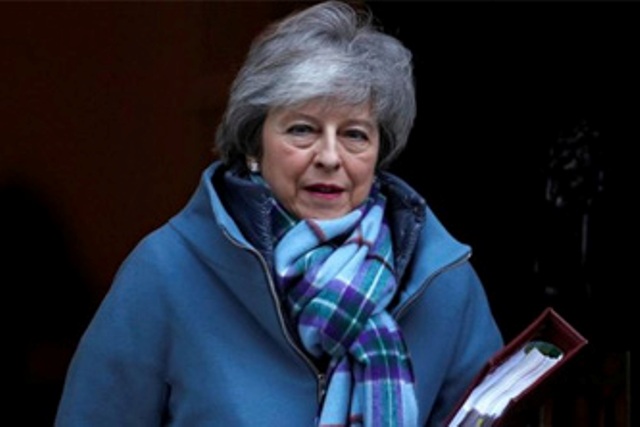 British Prime Minister Theresa May said on Sunday she would be “armed with a fresh mandate and new ideas” when she next meets European Union negotiators over her Brexit deal.

EU officials have insisted that the deal — rejected by British lawmakers –
– is not open for renegotiation.

But May wrote in the Sunday Telegraph that she would be “battling for
Britain and Northern Ireland” in her efforts to get rid of the agreement’s
unpopular “backstop” provision.

“If we stand together and speak with one voice, I believe we can find the
right way forward,” she said.

Downing Street said it had established “an Alternative Arrangements Working
Group” to mull the backstop issue starting Monday, and added that “there are
a number of ideas on this, including a unilateral exit mechanism or a time
limit”.

The so-called backstop is intended to ensure there is no return to a hard
border with Ireland, but Brexit supporters fear it will keep Britain tied to
the EU’s customs rules.

MPs voted last week to send May back to Brussels to renegotiate the clause,
suggesting that her deal would then be able to pass after it was roundly
rejected in parliament last month.

“I am now confident there is a route that can secure a majority in the
House of Commons for leaving the EU with a deal,” she wrote.

“When I return to Brussels I will be battling for Britain and Northern
Ireland, I will be armed with a fresh mandate, new ideas and a renewed
determination to agree a pragmatic solution.”

The EU insists that the current deal “remains the best and only way to
ensure an orderly withdrawal”, and German Foreign Minister Heiko Maas said
Sunday that “if the British want to avoid a disorderly Brexit, our offer is
on the table”.

But with the clock running down until the March 29 exit date the risks of a
no-deal Brexit for both Britain and the bloc are coming into sharp focus.

Car giant Nissan announced Sunday it was cancelling plans to build its X-
Trail SUV at its plant in northeast England, saying that “the UK’s future
relationship with the EU is not helping”.

May said opposition leader Jeremy Corbyn “also believes the potential
indefinite nature of the backstop is an issue”, and that the EU has “already
accepted the principle of ‘alternative arrangements’ superseding the backstop
should it ever be required”.

The backstop would kick in if Britain and the EU have not agreed a trade
deal on their future relationship after a limited transition period of up to
two years.

“Nor do I have time for those who believe the verdict passed by the British
people in 2016 should be overturned before it is even implemented,” she
added, referring to the rump of MPs calling for a second referendum.

May has promised MPs that she will bring any revised deal back to be voted
on by MPs on February 13.

Warnings of the consequences of a no-deal Brexit intensified last week as
several multinational firms, including Airbus and Ford, said jobs could
suffer with an unfavourable negotiating outcome.

Nissan dealt another blow on Sunday by announcing it was shifting future
investment away from its largest European plant in Sunderland, northeast
England, which employs 7,000 people.

The car giant announced in 2016 that it planned to build its X-Trail model
in Sunderland, but will now assemble it instead at Nissan’s global production
hub in Kyushu, Japan.

Queen Elizabeth II was even drawn into the fray, with the Sunday Times
reporting that the civil service had drawn up plans to whisk away the royal
family to a secret location if riots should break out due to no deal, with
Buckingham Palace declining to comment on the report.

The Brexit saga has driven a wedge in the heart of both major parties,
pitting centrists against their more ideologically driven MPs.

Several rebellious centrist Labour MPs, who want a soft Brexit or to stay
in the EU, are mulling forming a new party, according to Sunday’s Observer.

They are disillusioned with the ambiguous stance taken by leftist leader Jeremy Corbyn, who has been a long-term eurosceptic but said he voted to Remain in 2016.