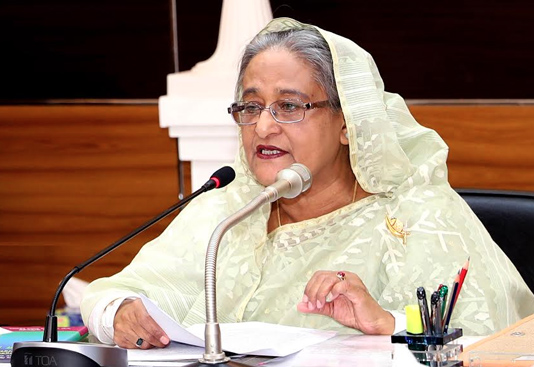 “Being imbued with patriotism, you’ll have to work becoming more people- friendly policemen and creating confidence and trust among the people,” she said while addressing senior police officers at the Prime Minister’s Office here this morning on the occasion of the Police Week -2019.

The prime minister said it is fact that the police cases are not finished on time and there is lacking of those who conduct cases.

“So you’ll have to play a special role in monitoring this properly and completing the cases speedily … you should have also a team to look into the fate of the cases,” she added.

PM’s Principal Secretary Nojibur Rahman was present on the dais.

The prime minister said the police cases remain pending in the courts years after years which needs engagement of government officials along with the lawyers.

“So, I think there should have a separate arrangement to look into these issues,” she said.

Terming terrorism and militancy as a worldwide problem, the prime minister said her government has been able to control the twin monsters.

“But we will have to continue our drive against militancy and terrorism and we should have a strategy to thwart any possible militant attack promptly side by side increasing intelligence surveillance and training,” she said.

While talking about the framing of the Digital Security Act, the prime minister said many people are speaking against the law. “But the reality is that the law has been enacted to ensure security of the innocent and common people and protect their human rights,” she said.

“The law has been enacted to save the life and property of the people alongside protecting their rights,” she added.

The prime minister said the law is helping the police in investigation and filing the cases as well as identifying and arresting the criminals involved in cyber crimes.

She praised the role of the police force in rooting out terrorism, militancy and drugs and vowed to continue the government’s fight against corruption side by side combating terrorism and militancy

“Graft impedes the economic development of the country while drugs destroy a society and country … from the abuse of drug, hijacking and theft take place and even the children kill parents for it,” she said.

The prime minister also laid importance on proper training of the police and said her government is setting up 100 special economic zones where specialised Industrial Police will be deployed.

She stressed the need for imparting specialised training to other specialised police units like River Police, Airport Police and Tourism Police alongside Industrial Police.

Sheikh Hasina said members of the police will have to move with immediate action taking into account the nature of the activities of the criminals. That specialised training must be imparted to make them capable of facing any situation fast, she added.

The premier mentioned that the police are giving more labour to maintain a peaceful environment in the country for economic development.

“We’ve been able to take the country forward economically as you have given that labour with efficiency and for it I would like to thank you,” she said.

The prime minister called upon the police to work with dedication and utmost sincerity for turning Bangladesh into a developed and prosperous country.

“Our journey has not yet ended, we’ve to go a long away,” she said.

About increasing manpower of the police, she said more manpower will be added to various units of the police so that the people can get their desired services.

On various demands of the police, Sheikh Hasina directed the authorities concerned to look into the issue of giving posting of the police personnel in different embassies and missions of Bangladesh abroad.

The prime minister expressed her determination to build a middle income country in the golden jubilee year of independence and a developed and prosperous one by the year 2041.