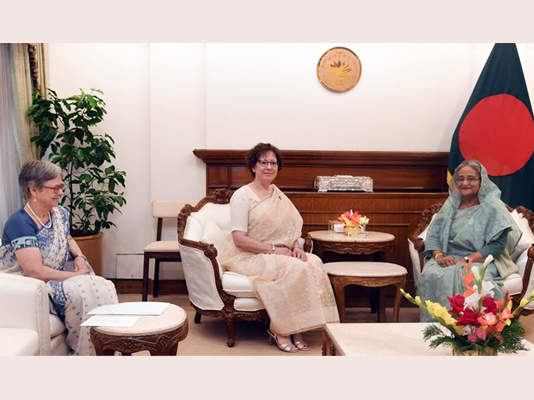 The premier made the request when Danish Ambassador Winnie Estrup Petersen and Ambassador of Norway Sidsel Bleken jointly called on her at her office.

Sheikh Hasina mentioned that her government is setting up 100 special economic zones for more industrialisation and generating employment in the country. “We also want to expand our export basket further through it,” she said.

The premier said her government is making rural-based development to change the lot of the grassroots people.

“The development of the country will be from the grassroots,” she said.

About women empowerment, the prime minister said her government ensured participation of women in all spheres.

She mentioned that the country’s women are now in very high position in all sectors like administration, judiciary, education, sports as well as in the armed forces and in law-enforcement agencies.

During the meeting, the Danish and Norwegian ambassadors offered their countries’ cooperation in Bangladesh’s energy and ICT sectors.

The ambassadors also lauded the drive of the government of Prime Minister Sheikh Hasina against corruption.

At the outset of the meeting, the two envoys handed over two letters from the Danish and Norwegian prime ministers congratulating Sheikh Hasina on her assumption of office as the premier for the fourth time.