Dhaka urges Jolie to stage event in Hollywood for Rohingyas 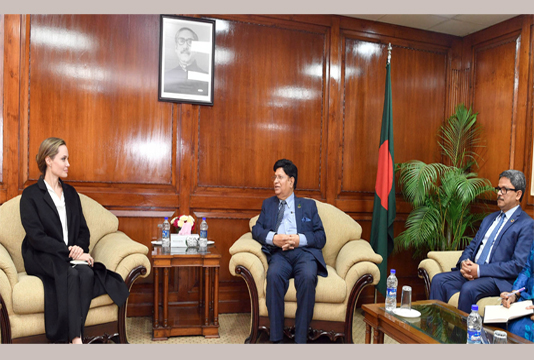 Bangladesh today urged global superstar Angelina Jolie to organize a mega event in Hollywood with fellow showbiz
colleagues to create a louder global opinion for the Rohingya cause as she called on Foreign Minister Ak Abdul Momen.

“I proposed her to organize a mega event in Hollywood to create a louder
international opinion for Rohingyas as she is a big voice,” Momen told
newsmen as Jolie met him at the foreign ministry ahead of wrapping up her
three-day Bangladesh tour.

Momen said he made the proposal recalling the huge impact of famous singer
George Harrison’s historic “Concert for Bangladesh” in New York in 1971.

He said Jolie “wants secured return of Rohingyas to their homeland”
agreeing to Bangladesh’s standpoint and vowed that she would act “all
possible ways within her capacity” to realize the right of displaced
Rohingyas.

The superstar earlier spent two days in Cox’s Bazar to see the plights of
over a million of minority Muslim Rohingyas who fled their home to evade a
brutal military crackdown.

Jolie went round the world’s largest refugee settlement ahead of a new UN
appeal for nearly one billion dollars to look after the Rohingya influx in
Bangladesh.

The megastar expressed her happiness over Bangladesh’s role to host and
support the huge number of Rohingyas even after having limited resources.

He said he told the celebrated actress that if Bangladesh Prime Minister
Sheikh Hasina would not have allowed Rohingyas to cross the border, the world
could have witnessed one of the largest genocide in the global history.

He said the Myanmar military launched the crackdown last year killing
24,000 Rohingyas, raping 18,000 women and setting fire to 1.5 lakh of their
houses and demolishing 1.12 others – a situation that yielded the world’s
biggest exodus.

Momen said Bangladesh gave them shelter on humanitarian ground “but we
don’t have that much resource to keep them here long”. The minister said he
also conveyed Jolie Dhaka’s concern that if the crisis lingered, the entire
region could be exposed to extremism and uncertainty putting everyone in
trouble.

The minister also informed her that many countries promised to provide
assistance to tackle the crisis “but we are not getting the assistance as per
their pledges”.

“I told the UNHCR high officials accompanying the actress that now we
don’t need sympathy, we want to see action to resolve the crisis,” Momen
said.

The celebrity went straight to camp in Teknaf and Cox’s Bazar near the
Myanmar border after arriving in the capital Dhaka on Sunday, talked to
Rohingyas and listened to their horrifying stories.

“The people responsible of human rights violations (in Myanmar) must be
held accountable for their action,” she told at a media briefing in Cox’s
Bazar.

Jolie described Bangladesh as a “generous country with rich culture and
history but with limited resources” and said it must not be left to tackle
the crisis alone.

She urged the international community to continue to provide the humanitarian aid necessary to meet the need of the refuges as well as support the local community who generously hosted the huge numbers of displaced Rohingyas.