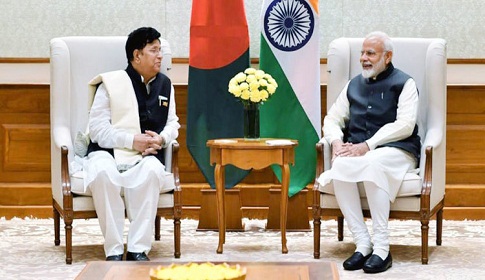 As Momen thanked Prime Minister Modi for India’s humanitarian assistance to Rohingyas, the premier said India is always with Bangladesh and will remain beside it, a press release issued by Bangladesh mission here said.

During the meeting, the Indian Prime Minister mentioned that the partnership between Bangladesh and India is flourishing under the visionary leadership of Prime Minister Sheikh Hasina.

He reaffirmed India’s sincere commitment to Bangladesh’s prosperity and development and viewed that Bangladesh-India relations are a model between the two neighbouring countries which need to be showcased for wider audience around the world.

The Foreign Minister expressed his satisfaction on the excellent bilateral relations that exist between the two countries which had grown and prospered, especially with the statesmanship of Prime Minister Sheikh Hasina and Prime Minister Modi.

He stressed that Bangladesh would continue her resolve in further strengthening and deepening her relations with India in the coming days.

Momen recalled that the two countries amicably resolved the longstanding problems, which is much appreciated by the respective peoples.

He also thanked Prime Minister Modi for extending congratulations upon the victory of Awami League in the parliamentary elections, held in December 2018 as the first foreign leader.

The Foreign Minister mentioned the remarkable progress Bangladesh has achieved during the last few years in the socio-economic sectors under the Awami League government led by Prime Minister Sheikh Hasina.

He also elaborated on the road map of Prime Minister Sheikh Hasina to realize the dream of Bangabandhu Sheikh Mujibur Rahman to build Bangladesh as Sonar Bangla.

They expressed satisfaction at the excellent state of bilateral relations between Bangladesh and India.

He hoped that both countries would be able to resolve the remaining outstanding issues between the two countries including the Teesta water sharing soon.

Dr Momen is visiting New Delhi on his maiden official tour abroad as the Foreign Minister of Bangladesh to attend the 5th meeting of India-Bangladesh Joint Consultative Commission tomorrow.

The meeting would be co-chaired by the Foreign/External Affairs Ministers of Bangladesh and India.

After the JCC meeting both sides are expected to sign few MoUs. Foreign Minister is expected to return to Dhaka on 9 February 2019, the release added.