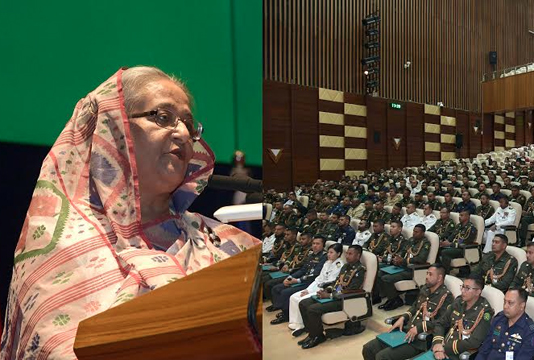 Terming the Armed Forces as the country’s symbol of independence and sovereignty, Prime Minister Sheikh Hasina today asked them to contribute more to progress of the nation and maintain democratic and constitutional stability in future.

“Our Armed Forces have earned name and fame on foreign lands by their
honesty and professional efficacy. Bangladesh Armed Forces are contributing
significantly to peacekeeping in various countries under the emblem of UN
mission,” she said.

The premier added: “The success of the Armed Forces has heightened the
image of Bangladesh.

They will also have to play an important role in progress of the nation
and maintaining democratic and constitutional stability so that we could take
forward the country’s development spree.”

The prime minister was addressing the graduation ceremony of the “DSCSC
2018-2019 Course” of Defence Services Command and Staff College (DSCSC) at
Sheikh Hasina Complex of the college at Mirpur Cantonment in Dhaka this
morning.

Commandant of the college Major General Md Enayet Ullah delivered the
welcome address at the function.

The premier said the Armed Forces are symbol of the country’s independence
and sovereignty.

“Alongside the noble responsibility of protecting our sovereignty, the
members of our patriotic Armed Forces are also making significant
contributions to the fields of tackling any crisis and disasters,
construction of infrastructures, socio-economic development, maintaining law
and order etc,” she said.

Sheikh Hasina said in the backdrop of today’s changing global security
scenario, the role of the Armed Forces has got new dimensions.

“Keeping this in mind, the Defence Services Command and Staff College has
given due importance to this issue in their training syllabi,” she said.

She underscored the need for making the training and syllabus time-
befitting so that the members of the Armed Forces could move keeping pace
with the world.

Sheikh Hasina instructed graduating officers of the college to remain
prepared for undertaking higher leadership role as well as perform
responsibilities with integrity.

“You have successfully completed this course by dint of your hard work and
perseverance and this course will make you more confident in discharging
assigned duties and in facing any challenge, more efficiently,” she said.

The premier continued: “You all should be prepared to undertake higher
leadership role … you all shall perform your duties with integrity.”

Spelling out the government’s steps for development of the college, she
said the government has taken up projects to extend infrastructural
facilities of this college.

Sheikh Hasina said the modern multistoried academic complex and other
installations have already been commissioned that enhanced the training
capability of the college.

Besides, more such construction and development works have also been
planned, which will further modernise the overall training structure of this
college in future, she said.

Describing Bangladesh as a peace-loving country, the prime minister said the
trust and respect of the country for world peace is aptly echoed in its
foreign policy – ‘Friendship to all and malice to none on the basis of
equality’.

Alongside the noble responsibility of protecting country’s sovereignty,
she said the Armed Forces are also playing important role in construction of
infrastructures, socioeconomic development, as well as for maintaining law
and order in the country, she added.

Praising role of the Armed Forces in maintaining world peace, Sheikh Hasina
said they are contributing significantly to peacekeeping in various countries
under the emblem of the UN mission.

About the DSCSC, the prime minister said the institution has been acclaimed
as a unique military educational institution in the international arena.

Besides, a total of one thousand one hundred and 11 officers from the Armed
Forces of 42 friendly countries have also obtained ‘PSC’ degree from this
college and they are contributing to the defence structure of their
respective countries.

Congratulating the graduates who successfully completed the course, Sheikh
Hasina hopes that they would now be more confident in discharging assigned
duties and in facing any challenge, more efficiently.

“You’ll have to love the country and its people and work with utmost honesty
and sincerity for making their life successful and turning Bangladesh into a
developed and prosperous country,” she said.

Pointing out her party’s victory in the 11th parliamentary elections, Sheikh
Hasina said, the new governments will fully implement all the pledges made to
the countrymen.

She said the people, being highly satisfied with the development works of
her government, have made the Awami League victorious again in the 11th
parliamentary elections.

“We will fully implement all the pledges made to the countrymen,” she said.

The premier said the people of the country are now enjoying the benefits of
development that took place in the last 10 years. “Once Bangladesh was known
as a country of corruption, famine and natural disasters and today we removed
that bad name … Bangladesh is now a role model of development in the
world,” she said.

The prime minister said the government is adopting development plan so that
the rural people get urban facilities in their village. “Our aim is to turn
every village into a town and we’re working to achieve the goal,” she said.

The prime minister said the government has taken massive plan for
development of road, river and rail communications. “To execute the plan our
armed forces are cooperating us and for this I am thanking them,” she said.

While talking about the construction of the Padma Bridge, Sheikh Hasina
said the government is implementing the mega project with its own fund.

She said the World Bank had raised an allegation of graft regarding the
bridge and the government had taken it a challenge. “The World Bank could not
prove the allegation. We started the work of the bridge with our own money
and I think this only decision has changed the image of Bangladesh in the
world,” she said. The premier continued: “We’ve proved through it that we
can.”

The prime minister expressed her determination to build Bangladesh as a
middle income country by 2021 and a developed one by 2041. “We also adopted
the Delta Plan-2100 for sustainable development and ensuring beautiful future
for the future generations,” she said.

A total of 215 officers — 118 from the Bangladesh Army, 29 from the Navy
and 23 from the Air Force — as well as 45 overseas officers from 19
countries — the USA, China, India, Saudi Arabia, Sri Lanka, Malaysia,
Liberia, the Maldives, Sierra Leone, Sri Lanka, Tanzania, Uganda, Zambia,
Palestine, Pakistan, the Philippines, Nepal, Nigeria and Indonesia — were
graduated this year from this college.