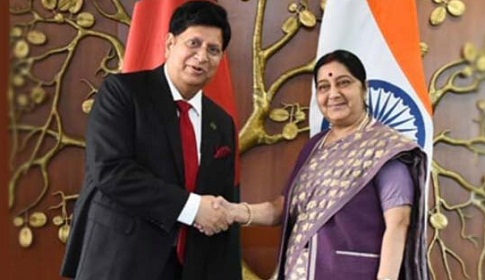 Bangladesh and India today decided to develop a forward looking roadmap for bilateral cooperation to make the partnership irreversible as they agreed on the need to expedite safe and sustainable repatriation of the displaced people from Rakhine State of Myanmar.

Appreciating Bangladesh for the humanitarian gesture in supporting a large number of displaced persons from the Rakhine region of Myanmar, Swaraj assured Momen of India’s continued support for safe, speedy and sustainable return of the displaced persons to Myanmar, according to a joint statement issued here.

During the meeting, the two sides reviewed ongoing cooperation including the implementation of decisions taken during the visits of Prime Minister Narendra Modi and Prime Minister Sheikh Hasina, as well as at the last meeting of JCC in October 2017, in Dhaka.

The two ministers also reaffirmed that the relationship between India and Bangladesh, forged in the 1971 Liberation War, goes far beyond a strategic partnership and today it is anchored in history, culture, language and shared values of democracy, secularism, development cooperation and countless other commonalities.

The entire gamut of bilateral issues of mutual interest also came up for discussion in the meeting, the statement said.

They also viewed that both countries are working closer than ever before in every sector, from security and border management to mutually-beneficial trade and investment flows, power and energy, river water sharing, development partnership, transport connectivity, culture, people-to-people contacts.

They welcomed the fact that the relationship was now broadening to include new and high technology areas for partnership, such as space, nuclear energy, IT and electronics.

They tasked their accompanying officials to develop a forward looking roadmap for bilateral cooperation to make the partnership irreversible. In particular, they desired that partnership-building efforts should be enhanced in a manner commensurate with commemoration of the 50th anniversary of Bangladesh’s Liberation.