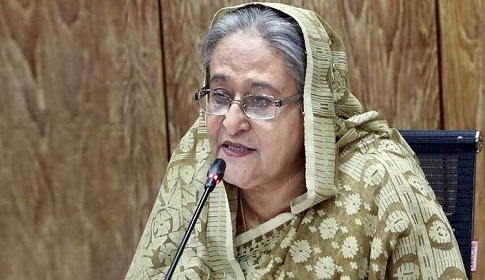 Prime Minister Sheikh Hasina today asked the LGRD ministry to sketch out a master plan to build up all upazila under a specific development design aimed at protecting cropland and check sporadic construction of buildings, roads and other structures.

The master plan should have a complete layout for housings, hospitals,
markets, schools, collages, playgrounds, agricultural farms, industries and
other facilities, she said, adding that people would accept the concept if
“we can do this once properly”.

Referring to the Bangabandhu’s initiative to constitute 60 districts, the
prime minister said Bangabandhu made every district as an administrative unit
to carry out development works, adding that “We should also do something like
that to ensure development from grassroots level”.

The prime minister said the government is mulling to prepare annual budget
separately for every district and upazila considering its size, population
and geographical aspects to meet the demands of the local people, reach the
services to the doorsteps of the people and ensure optimum utilization of
public money.

Pointing out the importance of the LGRD Ministry for country’s development,
the premier said her government wants to decentralize the administration
gradually aimed at strengthening the local government bodies, engaging them
in their local development initiatives and making all development
sustainable.

“We give highest budget allocation for the LGRD ministry. We will be able to
alleviate poverty to a larger extent if the LGRD ministry functions
properly,” the prime minister said, adding that the country would go ahead as
quick as “we can free the country from poverty”.

The prime minister said her government is taking overarching programs for
development of education, healthcare and other sectors. But there should have
plan considering the basic needs of the people living in village and town
areas, she said.

The premier said the LGRD and Cooperatives Ministry is very important in
terms of its size, activities and budget allocation. The tasks of the
ministry are multifaceted and most important task of it is to ensure safe
drinking water for the people, sanitation, development of rural roads and
ways. So, “we have to accomplish many tasks under the ministry with a very
specific plan,” she said.

Sheikh Hasina said the ‘one house, one homestead’ project had been
initiated so that every fallow land come under cultivation and rural people
sell their produces under a cooperative system to help them find a source of
income.

The prime minister said military rulers destroyed the strength of mind of
the people as a victorious nation. As a result, people were not yearning to
work for the country from their respective fields and Bangladesh was branded
very negatively across the world, she added.

Sheikh Hasina said Father of the Nation Bangabandhu Sheikh Mujibur Rahman
liberated the nation to bring smile on the faces of the millions, but could
not complete his dream. “We have to give importance to rural people and
development should have to be taken place at grassroots level if we want the
country to forward towards prosperity.”

Laying importance on strengthening cooperative movement, the prime
minister said her government, as prescribed in the constitution, has given
importance on the public and private sector as well as cooperatives.

She said Bangabandhu had envisaged for building every village under a
planned way where better housing facilities, playgrounds, hospitals,
croplands along with other civic amenities would exist. It’s a very difficult
task to meet the demand of huge population on a small land like Bangladesh,
she added.

“So, we have to take our own development programs considering the
geographical aspects, weather, soil condition and demography,” she also said.

The prime minister said many tasks initiated by her government in 1996-
2001 tenure were not completed by the next BNP government. But, it was an
immense opportunity for her government to work for the nation for ten years
since 2009 and take the nation on the way of a developing country, she
continued.

She expressed her firm conviction that Bangladesh would celebrate the
golden jubilee of the independence as a hunger and poverty free nation,
saying none would neglect Bangladesh in future.