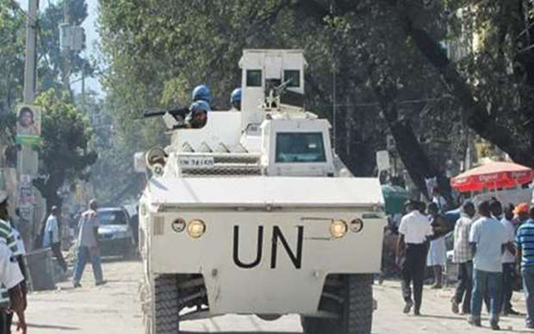 A traffic accident involving a United Nations armored vehicle killed four people and injured nine in Port-
au-Prince on Saturday, according to police and the UN.

The vehicle of the United Nations Mission for Justice Support in Haiti
(MINUJUSTH) lost the use of its brakes while driving in the capital and
collided with a collective taxi — known as a tap-tap — according to
witnesses.

An investigation is underway to determine the specific cause of the
accident.

“Four tap-tap passengers were killed and several others were injured in the
accident,” police spokesman Gary Desrosiers told AFP.

Two MINUJUSTH policemen and a Haitian policeman were among the wounded,
Desrosiers said.

MINUJUSTH put the toll at four dead and nine wounded, among them a Haitian
citizen and eight United Nations police.

“It is with profound sadness that the United Nations has learned of the
deaths of four people as a result of a road accident involving a public
transportation vehicle and a UN Armored Personnel Carrier (APC) that occurred
tonight,” it said in a statement.

MINUJUSTH — which currently includes 995 police officers — was deployed to Haiti in October 2017 to succeed another UN mission created in 2004 following the ouster of president Jean-Bertrand Aristide. The mission’s mandate is scheduled to end in October 2019.