Malaysia’s toppled leader to go on trial over 1MDB scandal 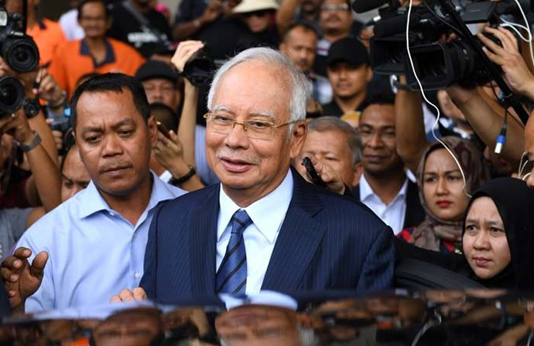 Malaysia’s toppled leader Najib Razak will go on trial this week over an extraordinary financial scandal that
contributed to the downfall of his long-ruling coalition and reverberated around the world.

The former prime minister and his cronies are accused of stealing $4.5
billion from Malaysian sovereign wealth fund 1MDB in a mind-boggling fraud
that stretched from Switzerland to the Seychelles.

The money was purportedly used to fund a global shopping spree — a $250-
million super-yacht, high-end real estate, and Monet and Van Gogh artworks
were among the items allegedly bought with cash plundered from public
coffers.

The scandal ensnared celebrities, with the fraud’s suspected mastermind
seen partying with Leonardo DiCaprio and Paris Hilton, while the new
Malaysian government has accused Wall Street titan Goldman Sachs of stealing
billions during its work with 1MDB.

Public revulsion at the graft allegations played a large part in the
election defeat of Najib — who set up the fund — and a coalition that had
ruled Malaysia uninterrupted since independence from Britain in 1957.

Since his shock poll loss in May, the 65-year-old has been arrested and hit
with 42 charges linked to the scandal. He has vehemently denied any
wrongdoing.

Far from keeping quiet, the aristocratic ex-leader has mounted a publicity
blitz, seeking to present himself as a man of the people and constantly
hurling jibes at the new government.

The case involves three counts of money-laundering, three of criminal
breach of trust — where someone is accused of dishonestly using something
entrusted to them — and one of abuse of power. Najib has pleaded not guilty
to all the charges.

It is just one of several trials Najib is expected to face over 1MDB and
involves a fraction of the total purportedly stolen from the fund, and the
$681 million that allegedly ended up in his personal accounts.

But the start of the first trial is nevertheless a key moment, and may
relieve pressure on the new government following criticism that it has been
slow to act over 1MDB.

“It’s an important moment, albeit a very delayed one,” said Cynthia
Gabriel, who was a member of a government committee set up to investigate the
scandal.

“It is very critical for the new government to address and resolve past
scandals,” added Gabriel, head of the non-profit The Center to Combat
Corruption and Cronyism.

The former leader and his defence team have portrayed the cases against him
as revenge by the new government led by 93-year-old Prime Minister Mahathir
Mohamad, Najib’s mentor-turned-nemesis.

“If you give me a straight judge, a straight system of justice, and the
witnesses are left to themselves without being coached, I’ll win this case,”
he told AFP.

Trial dates have been set until the end of March and prosecutors are
expected to call dozens of witnesses.

In recent weeks, Najib has transformed into an unlikely social media
phenomenon, gaining a large number of followers online by attacking the new
government’s policies and posting pictures of visits to homes where he talked
to people about economic problems.

In the most bizarre episode, he posted a video of himself crooning a Malay-
language version of the 1970s hit “Kiss and Say Goodbye” accompanied by
backing singers, in which he accused the new government of having an “agenda
of revenge and slander”.

It is a remarkable turnaround for a man who was regularly seen as out of
touch with ordinary Malaysians during his nine years as prime minister.

Bridget Welsh, a Malaysia expert at John Cabot University, said that “the new image… is fabricated and not connected to his term in office”. “I believe the trials will cause serious damage to Najib’s standing.”