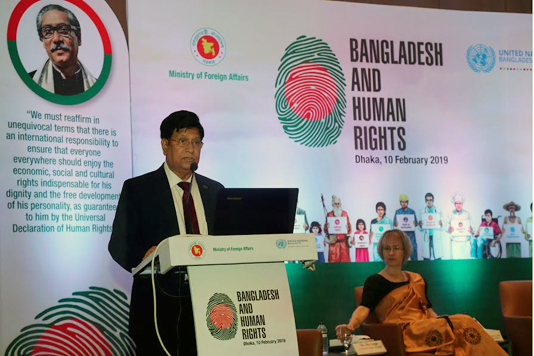 Foreign Minister Dr AK Abdul Momen today feared that lingering the Rohingya crisis may encourage radicalism that would create uncertainty and instability in the entire region in future.

“If this problem (displacement of Rohingya) lingers for a long time, it may encourage creating pockets of radicalism and that may create problem of uncertainty and instability not only for Myanmar and Bangladesh but also for the entire region,” he said while addressing a seminar in the capital.

Dr Momen said, “Therefore, the Rohingyas must go back to their homes, earliest the better.”

The foreign minister said Bangladesh seeks solid-rock standing and proactive cooperation of the international community to end atrocities and the worst form of human rights violation termed by UN High Commissioner of Human Rights as ‘classic example of ethnic cleansing’ and by others as ‘genocide’ in Myanmar.

“The global leadership must come forward to resolve this crisis at its root (Myanmar), not in Bangladesh,” he said.

Momen said the Rohingyas are stateless people, they lived in Myanmar for centuries and Myanmar itself, a state – “is failing to fulfill its obligation and responsibilities towards its own people”.

Mentioning that there are nearly 1.2 million Rohingyas or displaced residents of Rakhine province being sheltered in Bangladesh now, the foreign minister said they need to be repatriated with safely and security at the earliest. “There exodus was created by Myanmar and it is their responsibility to solve it,” he asserted.

“Our Prime Minister Sheikh Hasina, by allowing the persecuted people of Rakhine province of Myanmar, has saved the face of the global leaders from ignominy and disgrace,” the minister said.

He said Prime Minister Sheikh Hasina has become a ‘role model of humanity’ and a ‘leader of the world in protecting human rights and values’ by sheltering these persecuted people.

“No wonder, the UN members overwhelmingly voted Bangladesh again into its Human Rights Commission,” he observed.

He said the election manifesto of the new Bangladesh government has detailed the commitments to ensure human rights of all citizens and the rule of law.

“Bangladesh will take initiatives to develop national policies and strategies aiming at realization of the fundamental rights and principles as enshrined in the constitution, Universal Declaration of Human Rights and international human rights instruments to which it is a party,” he said.

Describing Bangladesh’s success in the last one decade, the foreign minister said “relative to our neighbours, Bangladesh is a star in socio-economic indices”.