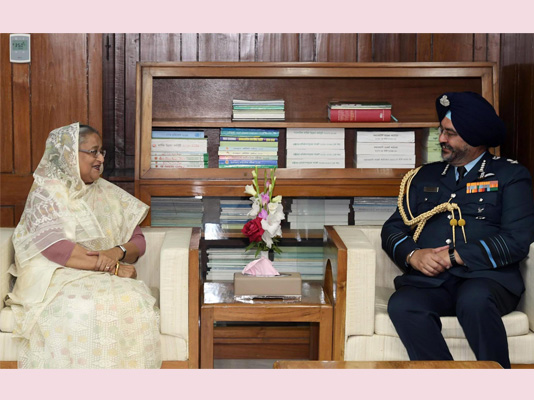 Prime Minister Sheikh Hasina today underscored the need for working together by Bangladesh and Indian Air Forces to combat any natural disaster.

“We hope that the cooperation between the two air forces will continue … they can also work together in the case of any natural calamity,” she said when Chief of Air Staff of Indian Air Force Air Chief Marshal Birender Singh Dhanoa paid a courtesy call on her at her Jatiya Sangsad Office here this evening.

Expressing satisfaction over the existing friendly relations between the two countries, the prime minister said: “There are wonderful relations between us and I hope the ties will be strengthened further in future”.

Highlighting Bangladesh’s stunning socioeconomic development over the last 10 years, Sheikh Hasina said the people are enjoying the fruits of uplift.

The prime minister said the aim of her government is to make development from the grassroots.

While talking about poverty alleviation, she said, the rate of poverty has come down to below 21 percent thanks to various steps of her government.

Sheikh Hasina recalled the support of Indian government and armed forces to Bangladesh’s liberation war in 1971.

The Indian Air Force chief also stressed the need for working together by Indian Air Force and Bangladesh Air Force to combat any natural calamity. “As this region is disaster-prone, the two air forces can work together to fight any disaster,” he said.

He expressed happiness as the prime minister invites Indian war veterans to Bangladesh every year. “We are very happy for it,” he said.

Birender Singh Dhanoa recalled that Indian defence forces returned home within three months of Bangladesh’s independence. “This is the only example in the world that a force returned back home after war within the shortest time,” he said.

He said Indian Air Force is ready to extend cooperation to build capacity of Bangladesh Air Force. He also laid stress on boosting cooperation between the two air forces in many areas, including training.

He also highly appreciated Bangladesh’s total development, particularly in readymade garment sector (RMG), under the leadership of Prime Minister Sheikh Hasina. “I always find ‘Made in Bangladesh’ tag whenever I buy clothes outside India,” he said.