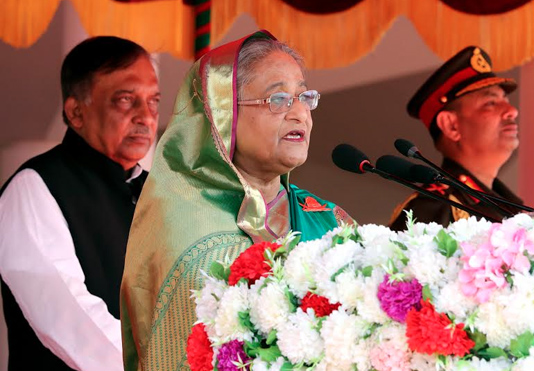 Prime Minister Sheikh Hasina today urged all including the members of Bangladesh Ansar and VDP to stay alert to
check militancy, terrorism and drugs in the country alongside working together to build a developed and prosperous Bangladesh.

“We’ll have to remain always careful to prevent militancy, terrorism and
drugs in the country,” she told the 39th National Rally of Bangladesh Ansar
and Village Defence Party (VDP) at its academy here this morning.

The premier also directed Bangladesh Ansar and VDP personnel to work
together with hard labour and honesty to keep up the country’s development
spree.

“As the biggest force of the country, you’ll have to work unitedly with
hard labour to continue advancement of our development … you’ll also have
to discharge duties reposed on you with utmost honesty, courage and
sincerity,” she said.

Reminding the Ansar and VDP members that peaceful and stable environment
is a pre-condition for the country’s overall development, the premier said
they are an important partner for maintaining this atmosphere.

On the occasion, the prime minister inspected a spectacular parade of
smartly-turned out contingent of Bangladesh Ansar and VDP riding on an open
jeep and took salute.

Earlier on her arrival at the parade ground of the academy, the prime
minister was received by Minister for Home Asaduzzaman Khan Kamal, Secretary
of the Public Security Division under the Home Ministry Mostafa Kamal Uddin,
and Director General of Bangladesh Ansar and VDP Major General Kazi Sharif
Kaikobad and the Commandant of the academy.

Ministers, the deputy speaker of the Jatiya Sangsad, advisers to the Prime
Minister, parliament members, chiefs of the three services, diplomats and
high civil and military officials were also present at the function.

Highlighting her government’s various strides for development of the
country and changing the lot of the people, the prime minister said her
government has taken up the “Ekti Bari Ekti Khamar” programme so that rural
people become economically solvent and no land remains fallow.

She said this programme has been renamed as “Amar Bari Amar Khamar” asking
the Ansar and VDP members to play a more role in this regard.

“As you’ve a training in this regard, you can play a more important role in
the project … I’ve already asked authorities concerned to involve you in it
as you can achieve economical solvency through it,” she said.

In this connection, the prime minister said her government has taken
massive programmes for socioeconomic development of the country and improving
the living standard of the people.

Urging all to work with utmost sincerity to retain Bangladesh’s
achievements in different sectors, Sheikh Hasina said Bangladesh has
graduated to a developing country from the least developed one because
various pragmatic initiatives of her government.

“We want to develop Bangladesh further and for this, all will have to work
with utmost sincerity,” she said.

Praising the role of Ansar and VDP members in maintaining law and order in
the country, the prime minister said they have been demonstrating their work
skill and success during any crisis and emergency period of the nation.

“You’re working with utmost sincerity in maintaining law and order in
different national and social functions and religious festivals as well as
checking militancy and narcotics,” she added.

Sheikh Hasina mentioned that 55,000 male and female members of the force
are performing their duties in different government and private
establishments to save public property and ensure security.

She said the Ansar and VDP members played an important role in holding the
last general election in a peaceful manner.

She also said 55 lakh Ansar members, risking their life, presented a free
and fair election to the people of the country by guarding over 40,000
polling centres and ensuring security of the voters.

“Five Ansar members died while performing their election duty and I pray
for eternal peace of their departed souls,” she said.

The premier also recalled the role of the Ansar and VDP members in
resisting the mayhem and violence of the BNP-Jamaat nexus from 2013 to 2015.

“They played a unique role in thwarting the BNP-Jamaat’s fire terrorism,
especially ensuring rail’s security and we were able to ensure security of
life and property of the people due to their significant role,” she said.

Elaborating her government’s initiatives for the development of the force,
Sheikh Hasina said her government is always sincere and sympathetic in
solving its problem.

Sheikh Hasina later witnessed a colourful cultural programme performed by
Ansar and VDP members and joined a “darbar” of Ansar officers and members.

Speaking after the spectacular cultural programme at the picturesque Ansar
and VDP Academy, the prime minister thanked the Ansar and VDP members and
their children for presenting a beautiful choreography and cultural function.

The prime minister pointed out her government’s initiatives for turning
every village into a town. “Our aim is that the rural people will get all
urban facilities … they will get developed life and will live beautifully,”
she said.

Sheikh Hasina said: “We want the future of today’s children will be more
bright and beautiful as well as technology-based.”

The prime minister sought cooperation of all to build a more developed and
prosperous Bangladesh.

She said Father of the Nation Bangabandhu Sheikh Mujibur Rahman liberated
the country with a goal of establishing a hunger and poverty-free Sonar
Bangla.

“Our commitment is to materialise his dream. We have removed hunger and
come down poverty rate significantly and the rate of poverty will have to be
cut further … Bangladesh will have to be made more developed and prosperous
and for this I seek cooperation of all,” she said.

The prime minister said she has firm belief that the Ansar and VDP members
could change every village.

“Bangladesh is a beautiful country and all will have to work to build our
motherland in such a way so that we could move keeping our head high, not
begging hand to others … we will establish ourselves by standing on our own
feet and own resources,” she said.

Sheikh Hasina became emotional when seeing that two children were dancing
on a boat during the cultural function of the Ansar members at Ansar and VDP
lake, saying that she recalls her childhood memories by witnessing the boat.

“I remember my childhood memories whenever I see boat … when will I take retirement, I will stay at my village and this is my decision. I will stay in Tungipara, my ancestral village,” she said.