ADB VP hopes a different Bangladesh in next ten years 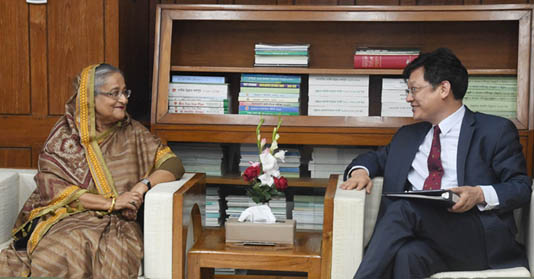 Visiting Vice President of the Asian Development Bank (ADB) Shixin Chen today hoped that the world in next ten years would see a different Bangladesh under the dynamic leadership of Prime Minister Sheikh Hasina.

Shixin said this during a courtesy call on Prime Minister Sheikh Hasina at her Sangsad Bhaban office here.

The ADB Vice President congratulated Sheikh Hasina for being elected as the prime minister for the fourth time and appreciated the tremendous socioeconomic progress of Bangladesh under her leadership.

Bangladesh’s 7.86 percent GDP growth is a tremendous achievement, Shixin said, adding she believes that it would be a different Bangladesh in next ten years as far as socioeconomic progress is concern.

Sheikh Hasina said continuity is a major factor for development. Bangladesh is now able to handle any manmade disaster like terrorism and militancy, she said.

The press secretary said ADB Vice President highly commended the generosity of the Prime Minister for giving shelter to huge number of Rohingyas in Bangladesh, saying it’s an incredible contribution to uphold the dignity of humanity.

Seeking ADB’s support to implement the ‘Delta Plan 2100’, the prime minister said the government has already signed an agreement with the Netherlands for river dredging.

Sheikh Hasina said the first and foremost goal of her government is to fulfill the basic needs of the people.

She informed the prime minister that the ADB has so far given US$ 5 billion to Bangladesh in various development projects since independence while US$ 200 million was given for Rohingyas.

The prime minister hailed the role of ADB in Bangladesh’s development efforts since 1973.

Sheikh Hasina said Father of the Nation Bangabandhu Sheikh Mujibur Rahman liberated Bangladesh aimed at building a hunger and poverty free nation. Since assuming office after 21 years of Bangabandhu’s brutal killing, the government has been making constant efforts to materialise the dream of Bangabandhu, she said.

The premier said her government is encouraging people so that no land in the country left uncultivated. Everything has been opened for private sector to accelerate development, she said, adding that ADB has also immense support to the efforts.

Sheikh Hasina said she is happy to see that people are enjoying the benefits of development.

Expressing her deep concern over Rohingya problem, the prime mister said about 40,000 new Rohingya babies born in Bangladesh. It’s huge burden for Bangladesh, she said, adding that the government is taking preparation to relocate them in a safe zone to let them live in a better atmosphere and with better facilities and living condition.

Pointing out different mega projects taken by her government for development, the prime minister said the government has initiated a project titled- “My home, My Farm” to reach urban facilities to every village.

Sheikh Hasina said the government is giving incentives to mothers to send their children to school as well as distribution of textbooks free of cost.

The ADB vice president said she is impressed with the key note speech delivered by the prime minister in the IFAD conference in Italy last year.