Hajj cost will not increase this year: Abdullah 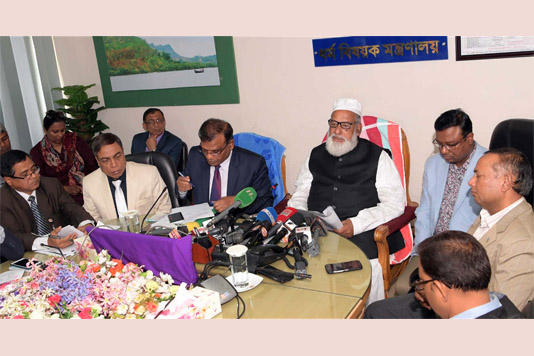 State Minister for Religious Affairs Advocate Sheikh Md Abdullah today said the cost of Hajj pilgrims would not increase this year as the government fixed maximum cost for hajj package at Tk 4,18,516.

“Although the Saudi Arabia government has imposed various charges on hajj
pilgrims this year …..considering the rise in the charges the total amount
of hajj was supposed to be increased, but it has not been increased so far,”
he told a press briefing at his ministry office here.

He said the government announced the hajj package yesterday while the
maximum cost for hajj (package-1) has been fixed at Tk 4,18,516.

The package-2 was Tk 3,31,359 last year while it was fixed at Tk 3,44,000
this year, the state minister said, adding that the Saudi Arabia government
increased Tk 12,000 in this package and that is why the comparative cost of
the package decreases.

Abdullah said as the Saudi authorities have fixed the same cost for hajj
pilgrims of all countries, no country could not be able to minimise the cost.
“We also cannot cut the cost. The Saudi Arabia government will take the
additional money, which increases the hajj expenditures,” he added.

The cabinet yesterday approved the National Hajj and Umrah Policy 2019 and
the Hajj Package, 2019.

The government will send hajj pilgrims to Saudi Arabia under two packages.
The total cost of first package has been fixed at Tk 4,18,516, including
airfare of Taka 1,28,000, while the cost of the second package will be Tk
3,44,000.

Every hajj pilgrim intending to avail train services have to pay additional
Taka 24,981, while others have to pay Taka 19,025 as service charges.

A total of 1,27,198 pilgrims will perform hajj this year while 1,20,000 will go under private management to perform hajj.