Ninth wage board gazette to be published quickly : PM 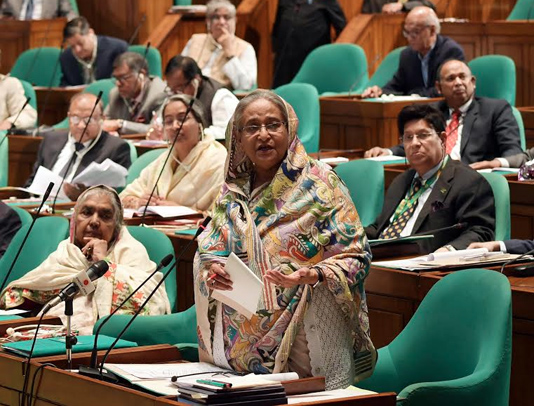 Prime Minister Shiekh Hasina today said the government will publish quickly the gazette of the ninth wage board award after scrutinizing the recommendations submitted by the wage board.

“The ninth wage board has recommended to pay 45 per cent dearness allowance
(DA) for the media workers of all the newspapers,” she said while responding
to a starred question placed by treasury bench lawmaker Mostafizur Rahman
Chowdhury of Chattagram-16 in the Jatiya Sangsad with Speaker Dr Shirin
Sharmin Chaudhury in the chair.

Sheikh Hasina said the government has been forming wage board regularly after
each five years to ensure remunerations and other benefits for the
journalists and media workers.

About the broadcast act, 2018, the leader of the house said the cabinet has
approved the draft of the broadcast act in principle in October 15 in last
year, adding that there is ample scope to take legal action against the
television channels if they broadcast fake news.

In addition to this, the government has formed ‘Bangladesh Journalists
Welfare Trust’ for providing financial assistance to the journalists who are
ill, financially insolvent, injured and deceased.