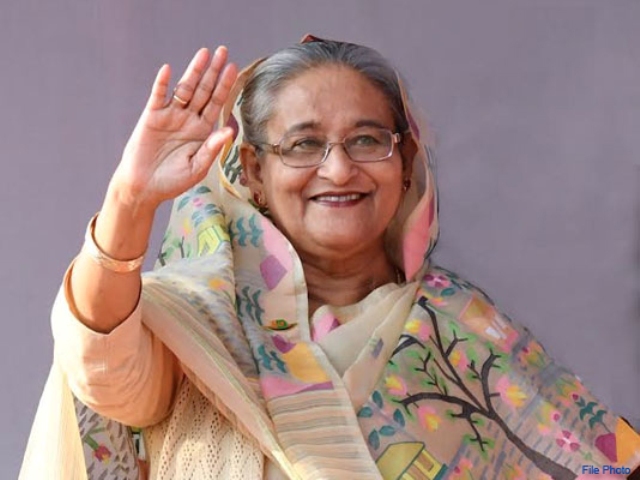 It is her maiden overseas tour in the third consecutive term in office which would also take her to the United Arab Emirates (UAE) during the return journey.

The two-day Munich Security Conference began in Munich, the third largest city of Germany, today where the premier has several other engagements including meetings with leading business conglomerates and health campaigners.

A VVIP flight of Biman Bangladesh Airlines carrying the premier and her entourage members landed at Munich International Airport at 1.10 pm (Munich time).

Bangladesh Ambassador to Germany Imtiaz Ahmed received the premier at the airport.

Later, a ceremonial motorcade escorted the prime minister to Hotel Sheraton where she will stay during the visit.

A huge number of expatriates Bangladeshis led by All European Awami League President Anil Das Gupta and General Secretary MA Gani greeted Sheikh Hasina on her arrival at the hotel.

Earlier, the prime minister left Hazrat Shahjalal International Airport in Dhaka for Munich on a weeklong official visit to Germany and the UAE at 8:20 am (BST).

Ministers, advisers to the premier, cabinet secretary, chiefs of the three services, the dean of the diplomatic corps and high civil and military officials were present at the airport to see the prime minister off.

Sheikh Hasina will visit the UAE capital of Abu Dhabi from February 17 to 19 to attend the 14th International Defence Exhibition (IDEX-2019) and hold bilateral talks with the UAE leaders.

In the evening today, Sheikh Hasina will attend a community reception to be organized by Bangladesh Mission in Germany at Hotel Sheraton.

The premier will attend the opening ceremony of the Security Conference tomorrow, deliver a statement and take part in a discussion on defense cooperation.

Sheikh Hasina is also scheduled to join a roundtable titled “Health in Crisis-WHO cares” to be hosted by Center for Strategies and International Studies and World Health Organisation (WHO).

In the afternoon, the prime minister will hold meetings with Joe Kaeser, President and CEO of Siemens AG, and Hans Wolfgang Kunz, CEO of Veridos.

She will join a dinner to be hosted jointly by Borge Brende, President of the World Economic Forum, and Jared Cohen, CEO of Jigsaw.

On February 16, the prime minister will join a panel discussion on “Climate Change as a Security Threat”.

From Munich Sheikh Hasina will come to Abu Dhabi on February 17 and attend the opening session of the International Defence Exhibition (IDEX-2019) at Abu Dhabi National Exhibition Center (ADNEC).

During the visit, the premier is likely to meet Sheikh Mohammed bin Zayed bin Sultan Al-Nahyan, Crown Prince of Abu Dhabi and hold bilateral talks with Sheikh Mohammed bin Rashid Al Maktoum, Vice President and Prime Minister of the UAE and Ruler of the Emirate of Dubai. She will have meetings with other leaders.

Sheikh Hasina will have an audience with Sheikha Fatima bint Mubarak Al Ketbi, Wife of Late Sheikh Zayed bin Sultan Al Nahyan, the Founder and the Inaugural President of the UAE and Ruler of Abu Dhabi at Al Bahar Palace.

The prime minister will join a community event at St Regis Abu Dhabi Hotel where she will stay during the visit.Sheikh Hasina will return home in the morning on February 20.