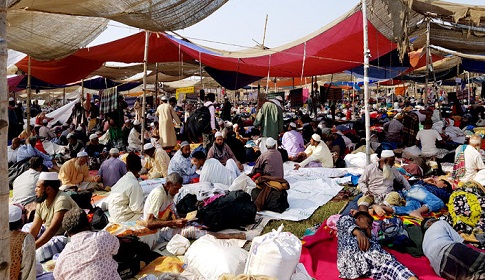 The two phases of the 54th Biswa Ijtema, the second largest congregation of the Muslims, will begin tomorrow morning on the bank of the Turag River at Tongi, on the outskirts of the city, amid tight security.

Prime Minister Sheikh Hasina today issued a message greeting the Muslim
devotees all over the world on the occasion of the Bishwa Ijtema and wished
all success of the four-day congregation.

However, all preparations for the Ijtema, including setting up pandel,
stage, floating bridge over Turag river and toilets have been completed. Gas,
electricity and water connections were given to the Ijtema ground.

The Biswa Ijtema should be successful at any cost as per the Prime Minister
Sheikh Hasina’s directives, he said after visiting the Ijtema compound.

Meanwhile, thousands of devotees from home and abroad started to throng
the Ijtema ground since Wednesday night to take part in the religious event
seeking divine blessings of the Almighty Allah.

Tablig Jamaat has been organizing the Ijtema at this venue since 1967.
However, the Ijtema is held in two phases since 2011 to ease the
accommodation problem.

Besides, foolproof security measures have been taken to hold the four-day
Biswa Ijtema in a peaceful manner. Five control rooms, including Gazipur City
Corporation, district administration, police, RAB and Ansar and VDP, have
been set up to monitor the overall activities of the Tongi Ijtema.

According to the sources, 15 watch towers of police and 10 of RAB have
also been set up to ensure over all security of the devotees.

Special measures have also been taken to ensure uninterrupted electricity
and water supply during the Ijtema. Around 3.54 lakh gallons of fresh water
will be supplied everyday through 13 deep tube-wells and 50 trucks will be
engaged round the clock in removing garbage from the Ijtema ground.

A total of 175 gas burner stoves were set up to provide cooking facilities
for foreign devotees at the Ijtema compound and healthcare centres have been
set up at different parts of the venue along with first aid and other
treatment facilities to provide health care services to the devotees.

Bangladesh Railway (BR) has launched four-day special train services on
several destinations for the devotees participating in the congregation.

Two special trains will be operated to Tongi from Jamalpur and Laksham on
February 17.

A total of four trains in the name of “Monajat Special -1,2,3,4” will be
operated on Dhaka-Tongi route on February 16, the day of first Akheri
Monajat.

Meanwhile, for convenience of travelling by the devotees, all inter-city, mail express and local trains heading toward the capital have been directed to halt at the Tongi Station for two minutes starting from February 12 and it
will continue till February 18. All kind of commuter train services will be suspended during the Biswa
Ijtema.