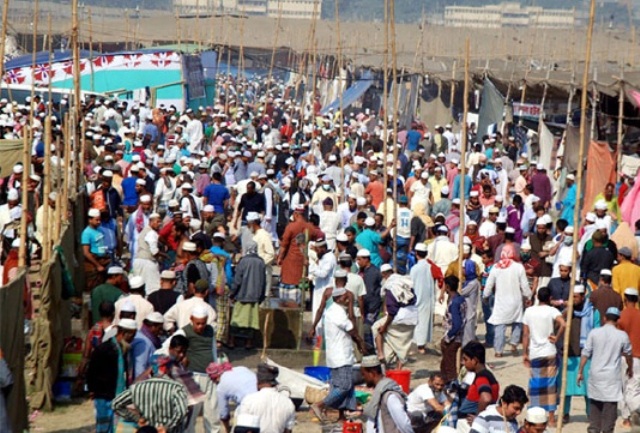 The first phase of the 54th Biswa Ijtema began after Fajr prayers today on the bank of river Turag at Tongi in Gazipur amid general sermon (Aam Bayan).

The first phase of the Ijtema began with ‘Aam Bayan’ (general sermons) by noted scholars after today’s Fajr prayers which will end with Akheri Munajat (final prayers) on February 16.

The second phase of the Ijtema will begin on February 17 at the same venue and it is scheduled to end with Akheri Munajat on February 18. Muslims of Tabligh Jamaat from 64 districts of the country are staying on Ijtema ground while foreign devotees staying in their respective special areas.

A total of 175 gas burner stoves were set up to provide cooking facilities for foreign devotees at the Ijtema compound and healthcare centres have been set up at different parts of the venue along with first aid and other treatment facilities to provide health care services to the devotees.

A large number of devotees were seen standing in a long queue in different free medical camps for treatment.

He said vehicular movement will be closed from this Friday midnight in city’s Tongi Bridge, Kamarpara Bridge, Bhogra bypass, Mirer Bazar and the adjacent areas near Ijtema by installing barricades. The same management will continue till the end of Ijtema, he added.