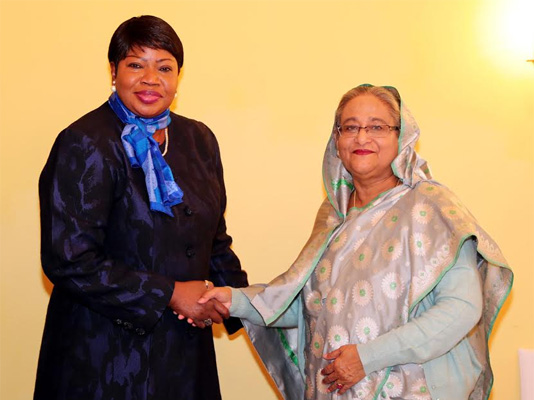 Prime Minister Sheikh Hasina today welcomed the decision of the International Criminal Court (ICC) to send a team for ‘preliminary examination’ of the atrocities on Rohingyas by Myanmar Army.

She assured the ICC to give all possible support to the team which is scheduled to visit Bangladesh next month, Foreign Secretary Md. Shahidul Haque said while briefing reporters following a meeting of the prime minister with ICC Chief Prosecutor Dr. Fatu Bensouda on the sidelines of the Munich Security Conference here.

“The prime minister in principle welcomed the ICC team which will visit Bangladesh at the beginning of March and assured them of giving all support in this regard,” the foreign secretary said.

PM’s Press Secretary Ihsanul Karim was present at the briefing.

Haque said the prime minister and the ICC chief prosecutor discussed the issues relating to the trial of genocide of Pakistani Army in Bangladesh in 1971 and atrocities on Rohingya nationals in Myanmar.

He said Prime Minister Sheikh Hasina laid importance on bringing the perpetrators of the genocide of Pakistani Army in Bangladesh in 1971 to book.

About the trial of atrocities on Rohingyas, Dr Fatu said the ICC has already brought the Rohingya issue under its jurisdiction and set up a court for trial of the perpetrators.

He said the ICC team will visit Bangladesh to have the ‘preliminary examination’ aimed at establishing the case.

The prime minister also underlined the background of the killing of Bangabandhu and his family members in 1975 and informed the ICC chief prosecutor about the trial process of the killers.

Dr Fatu, a national of Gambia and international lawyer, said she knows about the brutal killing of Bangabandhu.

The ICC chief prosecutor requested the prime minister to visit the ICC to speak to the judges on the issue of the trial of the 1971 genocide.

Dr Fatu thanked the prime minister for playing a pioneering role in the ICC. “Bangladesh Ambassador is actively playing role in various committees in the ICC,” she said.

The ICC is a new area where Bangladesh is being involved very actively in recent time, the foreign secretary said.

Fihn thanked the Prime Minister for Bangladesh’s firm stance on nuclear weapons abolition issue and appreciated Bangladesh as the country since Bangabandhu’s era in 1974 has been making constant efforts to make South Asia a nuclear free zone.

The foreign secretary said Fihn hoped that Bangladesh would take a pioneering role in abolishing nuclear weapons as two big countries in the region developed such weapons.

Haque said Fihn praised the prime minister’s diplomatic efforts to bring peace and stability in the region soon after nuclear bomb tests in India and Pakistan in late nineties.

She also recalled the prime minister’s visit to the two countries aimed at pursuing them to stop nuclear arms race and spent the money for development and poor people.

Bangladesh is one of the first countries which signed the convention on abolition of nuclear weapons, she said.

Fihn informed the prime minister that they are considering organizing an event on abolishing nuclear weapons on the sidelines of the coming UN General Assembly and invited the premier to join the programme.