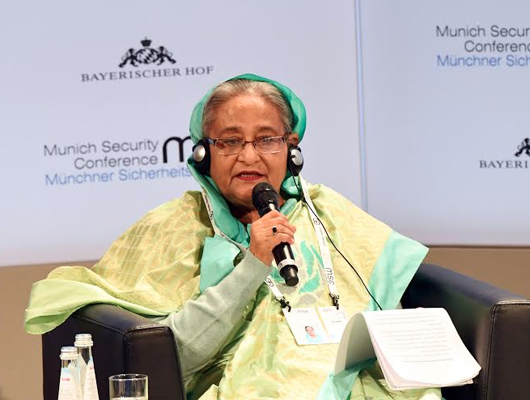 Prime Minister Sheikh Hasina has made a fervent call to richer nations “will” to negate the climate change
impacts to protect the Mother Earth saying their determination alone appeared missing since the world by now have the rest of the resources.

“We (by now) have enormous amount of science, technology, innovation and
finance at our disposal to address climate change,” she said while addressing
a panel discussion titled “Climate Change as a security threat” on the
sidelines of the Munich Security Conference here last night.

The Bangladesh premier added: “We (now) only need the ‘will’ of the richer
segments of societies – everywhere – to act ambitiously against climate
change”.

The Munich Security Conference drew over 25 heads of states and
governments and brought together climate experts, NGOs and research
institutions while the panel discussion was a major side event to facilitate
an open dialogue that discusses the pressing global security issue.

Sheikh Hasina said climate change posed a real threat to human being with
unabated rise of global temperature while it spread clutches to Bangladesh
increasing the frequency and intensity of cyclones, storm surges and monsoon
flooding, simultaneously challenging the people’s livelihood.

She said despite being a low emitting country, Bangladesh pledged in 2012
at UN General Assembly to pursue a low-carbon development pathway as its
commitment to ‘collective good’.

The prime minister said none should have any doubt that environmental
vulnerabilities only lead to fragile and jeopardize human security.

Chief Political Correspondent of Deutsche Welle, Berlin Melinda Crane-Rohrs
moderated the function and introduced the topic and speakers of the panel
discussion.

Sheikh Hasina said climate change has become a real threat for human being
with unabated rise of global temperature. In Bangladesh, increasing cyclones,
storm, surge, and monsoon flooding challenge livelihood of our people.

She said Bay of Bengal is increasingly getting acidic and one third of
Bangladesh’s population is eventually at risk displacement with rising sea
level although the country has a very little contribution to global warming.

The prime minister said flooding erodes river banks during every monsoon
and numerous families overnight become homeless and helpless. The erratic
pattern and intensity of rainfall and rising heat make farming difficult for
the people.

Sheikh Hasina said changing climate is taking toll through emergence of new
pathogens. Diseases like malaria, which we successfully eradicated risks a
come back. Similar risks are evident in diseases in serials, livestock and
poultry.

Temperature variation is challenging breeding of our national fish- Hilsha.
All these are serious enough challenges for the precious gains we made in
development, she added.

The Prime Minister said despite the fact and also the IPCC findings- a lot
of people- including those that are conscious of climate change are yet to
understand the climate displacement issue.

Sheikh Hasina said an estimated 46 million people were displaced in South
Asia alone by sudden onset disasters during 2008 to 2013, though the actual
number of people moving internally and across borders in south asia is not
known.

It is anticipated that population movements in the context of disasters and
climate change in south asia, south east asia and in the Indian ocean rim are
likely to increase over the next decades, she said.

Replying to a question the Prime Minister said in Bangladesh military has
been engaging with a lot of development activities in the country. Military
is leading the disaster response in Bangladesh. They can also be engaged in
early warning mechanisms.

Sheikh Hasina said most of the UN members are engaged in the discourse of
climate change in the multilateral fora. “We need to keep the discussions and
engagements up,” she said.

The Prime Minister said Bangladesh is one of the most vulnerable frontline
countries. In Bangladesh, the present government has mainstreamed climate
actions and disaster risks reduction in national plan.

“We have investment of over 1 percent of our GDP to adress climate change
impacts. Moreover, USD 450 million has been allocated from our own sources
for adoption and mitigation purposes,” she said.

Sheikh Hasina said her commitment to low carbon, climate resilient
development is firm. We planned to move to ‘carbon budgeting’, resilient
industrialisation, she said adding that “we wish to decarbonise our
manufacturing pathways.”

In spite of limitation, she said, Bangladesh has allocated USD 385 million to the Bangladesh Climate Change Trust Fund (BCCTF) for adaptation and mitigation.