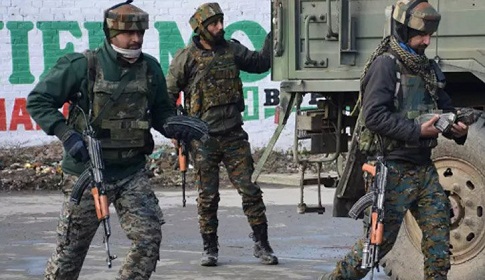 The confrontation piled more pressure on the Indian government, which has
blamed Pakistan for Thursday’s suicide attack on a paramilitary convoy that
sparked widespread calls for action against the country’s neighbour and
nuclear arch-rival.

Shooting continued for hours after military and police sources reported
that four soldiers, two militants and a civilian were killed in Pulwama
district, south of Srinagar, the main city in Indian-administered Kashmir.

An army major was among the dead, according to the Indian army. Police
said another soldier and a civilian were critically wounded.

“The encounter is still on,” Colonel Rakesh Kalia, a military spokesman in
Kashmir, told AFP.

Hundreds of soldiers raided villages and fired warning shots at a
suspected militant hideout, unleashing the firefight in the village of
Pinglan.

Some of the militants were believed to have escaped, police said, and
government forces cordoned off other villages as they gave chase.

The deadliest attack in Kashmir in 30 years was claimed by Pakistan-based
militant group Jaish-e-Mohammed (JeM), which said a local supporter was
driving the vehicle.

Kashmir has been split between India and Pakistan since independence from
Britain in 1947. Both claim the Himalayan region and have fought two wars
over the territory.

New Delhi accuses Pakistan of harbouring the militant group and has vowed
retaliation to avenge the deaths.

Pakistan has denied a role in the attack, insisting the Islamist group is
a proscribed “terrorist organisation”.

JeM is one of several militant groups fighting Indian troops in Kashmir,
with the rebels experiencing a resurgence after a popular rebel commander’s
death in 2016 triggered months of mass street protests.

The shock attack has fuelled anger across India with demonstrators
demanding military action against Pakistan.

India launched what it called ‘surgical strikes’ on targets in Pakistani
Kashmir in September 2016, 11 days after a militant attack on an Indian army
base in Kashmir which left 19 soldiers dead.

Many small businesses and shops in markets across New Delhi were shut
Monday to protest against Thursday’s attack. Calls for a nationwide shutdown
met with a mixed response however.

Protesters in New Delhi on Sunday burned effigies of Pakistani and JeM
leaders while attacks on Kashmiris were reported in different cities.

A Kashmiri man was beaten by a mob in New Delhi that accused him of
chanting anti-India slogans. He was later detained by police.

A curfew remained in force for a fourth day in Jammu city, in the Hindu-
majority part of Kashmir, where mobs attacked and set fire to properties
belonging to Kashmiri Muslims.

Thousands of residents in the city have either fled back to the Himalayan
valley or have taken refuge in Muslim-majority areas.

Mobile internet has been shut down across the state to stop “rumours” from
spreading.

Kashmir is the world’s most militarised zone with some 500,000 Indian
troops deployed to fight a rebellion that broke out in 1989. Scores of armed
groups are now involved.

Tens of thousands of people, mainly civilians, have died in the conflict.
Violence has spiked since 2016 with almost 600 killed last year, the highest
toll in a decade.