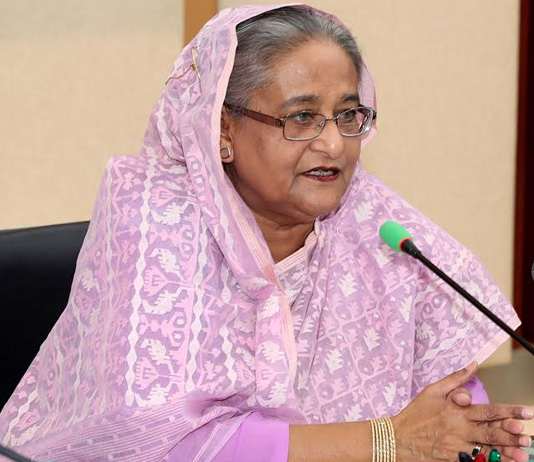 Prime Minister Sheikh Hasina has said the Myanmar government has failed to create a congenial atmosphere to take back Rohingya people despite signing an agreement with Bangladesh for their repatriation.

She said Myanmar should take the responsibility and allow the Rohingya refugees to return as they are their citizens.

“We already have signed an agreement with the Myanmar government and they agreed to take them back. Unfortunately it did not happen. We could not implement it,’ said Sheikh Hasina in an interview with the Khaleej Times on February 19.

Commenting on the slow progress of the Rohingya Repatriation Agreement signed between Bangladesh and Myanmar last year, the prime minister said: “But unfortunately, the Myanmar government fails to create a congenial atmosphere to take them back. Some of these people are not feeling confident to go back. But I think it is the duty of the Myanmar government to create such an atmosphere so that these people should feel some kind of confidence to go back.”

More than 700,000 Rohingya refugees fled the Buddhist-majority Myanmar in August 2017 and crossed over to Bangladesh to escape violence and ethnic cleansing by the Myanmar military.

International organisations have repeatedly reiterated that the conditions in Myanmar are not conducive for the safe and dignified return of Rohingya despite the bilateral agreement in place.

When asked whether the international community is doing enough to put pressure on Myanmar, Sheikh Hasina said: “Actually they are trying. No doubt about it. But somehow, I don’t know why it is not working well.”

But the premier, who was lauded by the international community for her humanitarian gesture in hosting more than a million refugees despite the enormous strain on Bangladesh’s resources, said she was hopeful that “some day will come when Myanmar will also realise that this is not the way. They are their citizens and definitely they should take them back”.

Sheikh Hasina rubbished allegations that her country was in a hurry to send back refugees despite the unsafe conditions.

Recalling her painful past when she herself and her sister were forced to live as refugees when Bangladesh plunged into civil war in 1971, Sheikh Hasina said: “Being a refugee and staying homeless…the sorrow and pain, we can understand that. Therefore, I understand that this people should go back to their own country. They should lead a better life.”