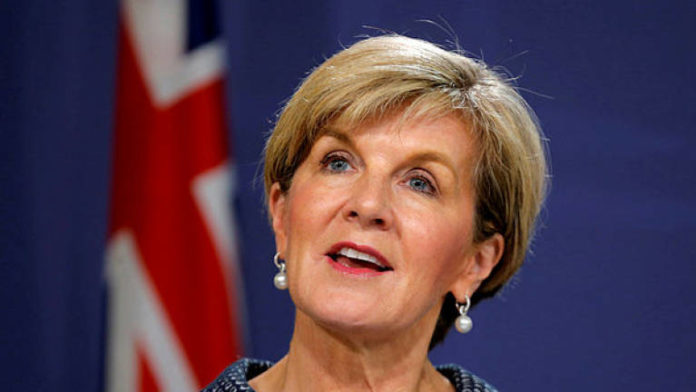 Bishop, widely considered the most popular politician in the ruling Liberal Party of Prime Minister Scott Morrison, stunned her parliamentary colleagues with the decision not to re-contest her West Australian seat in elections due by mid-May.

“I will leave this place, positive about the future, proud of the service that I have been able to give to my electorate of Curtin, my beloved Liberal Party, the state of Western Australia and my country,” she said to standing applause from both sides of parliament.

Bishop was the first woman to serve as Australia’s foreign minister, from 2013 to 2018, and as deputy Liberal leader, and the latest of several Liberal women MPs to either retire or quit the party to become independents.

But her standing in the party suffered when right-wing powerbrokers ousted moderate Malcolm Turnbull as Liberal leader and prime minister in August.

Bishop was one of three candidates to run for the leadership in Turnbull’s place, but was snubbed by party colleagues despite opinion polls showing her as the most popular Liberal politician.

Defections by female Liberal MPs and a by-election loss have put the Morrison government into the minority in parliament, while opinion polls show the opposition Labor Party comfortably ahead in the run-up to the elections.

Morrison, who won the vote to replace Turnbull, heralded Bishop as a “ground-breaker” for women in public life.

“Julie has been a good friend. I have valued her judgement, appreciated her insight and admired the tireless way she has served the party, the parliament and Australia,” he said in a statement.

Renowned for her steely gaze dubbed the “death stare”, Bishop’s highlights as foreign minister include her strong condemnation of Russia’s role in the shooting down of Malaysia Airlines MH17 in 2014.