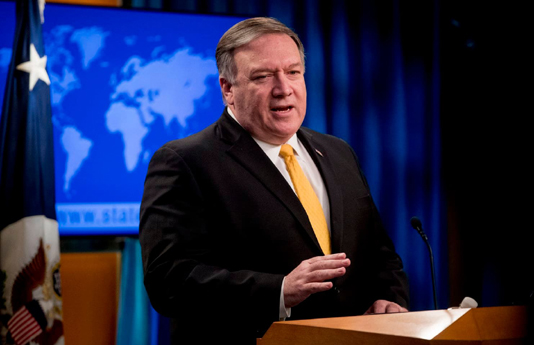 US Secretary of State Mike Pompeo discussed peace efforts in Yemen and the crisis in Venezuela with UN Secretary-General Antonio Guterres in New York on Thursday, a UN spokesman said. The 35-minute meeting at UN headquarters was requested by Pompeo.

Pompeo and the UN chief “discussed the situation in Yemen, in particular the implementation of the Stockholm Agreement and the importance of the parties to begin phase 1 of the redeployment from Hodeida,” UN spokesman
Stephane Dujarric said.

“They also discussed the situation in Venezuela and the region”, he added, without providing details. Yemen’s government and Huthi rebels have agreed on the first phase of a redeployment of forces from the Red Sea port of Hodeida, in line with a ceasefire deal reached in Sweden in December.

The port is the entry point for the bulk of humanitarian aid and supplies
to Yemen, where millions are on the brink of famine.

UN envoy Martin Griffiths told the Security Council on Tuesday that he
expected the pullback of forces to begin in the coming days, but by Thursday
there had been no movement on the ground.

On Venezuela, the UN chief has called for serious political negotiations to
end a standoff between leader Juan Guaido, who has declared himself interim
president, and President Nicolas Maduro.

The United States is leading a push to recognize Guaido, backed by about 50
countries including Britain, France, Germany and several Latin American
nations such as Brazil, Argentina and Colombia.

Fears are growing of a violent confrontation over Guaido’s bid to bring US humanitarian aid into the country from Colombia, in defiance of the government which accuses Washington of using aid for regime change. The United Nations has said that aid should not be politicized.