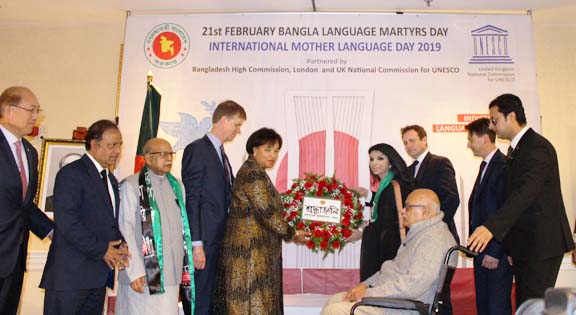 The high commissioner said that it was also the historic 7th March speech of Bangabandhu in Bangla, not in English that was included as a documentary heritage in the Memory of the world International Register of UNESCO.

Tasneem added that following the footsteps of her father, Prime Minister Sheikh Hasina has been championing Bangla by calling upon the United Nations to declare it as one of its official languages.

“The prime minister has also been particularly praised for establishing the International Mother Language Institute in Dhaka for preserving 8000 mother languages of the world,” she said.

The day’s programme began at 11 am with hoisting the national flag at half-mast by the High Commissioner at the chancery premises in presence of the mission’s officers and officials and senior community members.

Special prayer in memory of the language martyrs, Bangabandhu and his family members who were brutally killed in 1975 and for Prime Minister Sheikh Hasina was also offered.

The High Commission organised the programme at Millennium Gloucester Hotel under the theme of this year’s International Mother Language Day – ‘Indigenous Language Matters’ in partnership with UK National Commission for UNESCO with active support from 11 other Embassies, High Commissions, UK Institutions and the Commonwealth.

This was the first of its kind a joint collaboration truly upholding the spirit of Bangladesh-UK bilateral cultural cooperation as well as diversity and multiculturalism in London.

The speakers highlighted the history and the spirit of the Bangla language movement and observed that coordinated approach and efforts would strengthen further the cultural relations across nationalities.

A documentary on the language movement was screened at the event and artists from different nationalities performed songs and dances in a multi-lingual colourful cultural soirée.

Earlier at one-minute past mid-night on 21 February, the High Commissioner along with Tower Hamlet Mayor John Biggs laid the wreathes at the Shaheed Minar at the Shaheed Altab Ali Park in East London. They were followed by different organisations, institutions and leaders, and brothers and sisters from British-Bangladesh community.