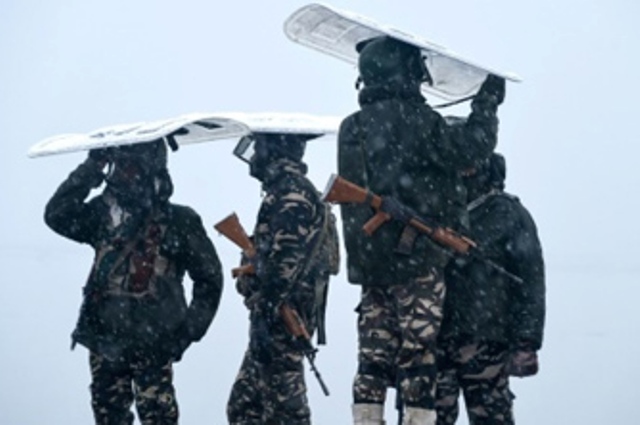 Indian authorities arrested dozens of Muslim leaders in raids across Kashmir and sent thousands of reinforcements to the troubled territory on Saturday as Prime Minister Narendra Modi stepped up warnings to Pakistan over a suicide bomb attack.

As international concern grows over India-Pakistan sabre-rattling, residents of Kashmir, at the centre of a decades-old struggle between the nuclear-armed neighbours, reported heightened military activity.

The region has been on edge since the February 14 attack on an Indian convoy which killed 40 soldiers and was claimed by Pakistan-based Islamist group Jaish-e-Mohammed (JeM).

India has accused Pakistan of supporting the attack — a claim rejected by the Islamabad government — and there have been widespread calls for nationalist leader Modi to order a reprisal strike.

About 10,000 paramilitaries started arriving in Kashmir on Saturday, a day after India ordered the reinforcements.

Modi told a rally in Rajasthan state that the country was “angry” about the attack in the Pulwama district of Indian-held Kashmir.

“After the Pulwama attack, you must have seen how Pakistan is being brought to account one step at a time. They are in a state of panic because of our government’s decisions,” Modi said, speaking in Hindi.

“We will not sit quietly after taking this pain. We know how to crush terrorism,” he added. “We have given full freedom to the military.”

Among those taken into custody in the crackdown in Kashmir were senior figures in Jamaat-e-Islami, the region’s biggest religious organisation, and the Hurriyat Conference, a coalition of local political parties.

Jamaat and Hurriyat Conference both strongly support Muslim Kashmir’s right to choose whether it wants to be part of India or Pakistan, which have been fighting over the region since independence in 1947.

“Police and other agencies launched a mass arrest drive and raided many houses in the valley with dozens of… central and district-level leaders arrested,” Jamaat said in a statement, adding that those detained included central leader Abdul Hamid Fayaz.

Police linked the arrests to security preparations for upcoming elections in India and a Supreme Court hearing on Monday on a challenge to a constitutional provision that gives Kashmiris special rights to property and jobs in the territory.

But the arrests drew widespread criticism from Kashmir political leaders.

“Fail to understand such an arbitrary move which will only precipitate matters,” Mehbooba Mufti, a pro-India former chief minister said on Twitter. “You can imprison a person but not his ideas.”

“Such illegal and coercive measures against Kashmiris are futile and will not change realities on ground,” wrote Mirwaiz Umar Farooq, an influential separatist leader, on Twitter.

Businesses across Kashmir were shut on Saturday, some in protest at the arrests and with others fearing conflict between India and Pakistan.

Many in Kashmir are wary of a military strike over the suicide bomb and residents in several areas reported unusual military air activity on Friday night.

Authorities did not comment on the reported fighter aircraft and helicopters flying over the territory.

The showdown has sparked international concern with US President Donald Trump calling it “very dangerous”.

“We would like to see it stop,” he added in comments at the White House on Friday.

“India is looking at something very strong. India just lost almost 50 people with an attack. So I can understand that also,” Trump said. India and Pakistan have fought two of their three wars since 1947 over Kashmir.