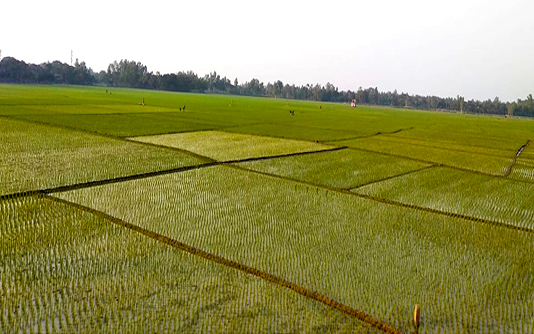 Seedling transplantation of Irri-boro paddy has got a highest peak as the farmers put in their level best efforts to
complete the transplantation process in due time. At present, the farmers are passing their busy days in seedling
transplantation and nursing of the newly transplanted tender plants everywhere in all eight districts under Rajshahi division including its vast Barind tract.

“We are very much hopeful about exceeding the target of seedling
transplantation like the seedbed,” expects SM Mustafizur Rahman, Additional
Director of DAE, while talking to BSS here today.

Agriculturist Rahman said steps have been taken to ensure smooth Boro rice
cultivation this season. The farming is going on in full swing across the
region as they are optimistic of harvesting the crop early, he added.

“I have already cultivated Boro on eight bighas of land this season”, said
Lokman Hossain, a farmer in Mohadebpur upazila, adding, “I will bring some
more lands under the farming within a very short time.”

The DAE has distributed some 20-kg seeds of Boro rice, 20-kg DAP and 10-kg
MoP fertilisers free of cost to each farmer.

President of Water Management Association of Paba Nurul Amin said, “The
farmers of my area are now busy in Boro cultivation. I am cultivating Boro on
six bighas of land when it was only three-bigha in last year.

Abdullah Heel Kafi, regional agriculture information officer, said the DAE
and other agriculture-related organisations, Power Development Board and
Rural Electrification Board are ensuring smooth supply of seed, fertilizers
and electricity to the farmers to ensure smooth Boro paddy cultivation.

He said the farmers were imparted training on how to adopt conservation
agriculture technologies like Alternate Drying and Wetting irrigation method
at a larger scale then farming of Boro paddy to save irrigation for
increasing its output at reduced costs.