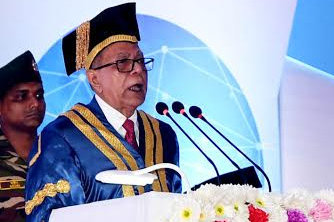 President Hamid, also the chancellor of the university, urged the students to shun dependency on the political parties or persons so that the country can get dedicated, efficient and worthy leaderships.

Stressing on the extra-curricular activities and practice of free-thinking on the campus, he suggested the authorities concerned to keep close watch on the students so that none can get involved in any anti-social activities, including extortion, terrorism, drug abuse and militancy.

The head of the state put emphasis on ensuring effective, relevant and practical ‘academic curriculum” through giving priority to science and technology based education and taking various pragmatic steps to explore the potentials of teachers and students by conducting research.

About opening of “Bangladesh and Liberation War Studies Department” and a compulsory course on the history of Bangladesh’s origin, the President lauded the academic activities and curriculum of the NSTU.

“I’m very glad to know that this technology-based university is being run with the spirit of Bangabandhu’s ideals and the freedom struggle,” added Abdul Hamid, one of the organizers of the 1971 Liberation War.

Mentioning the tremendous socio-economic progress of the country, Hamid said, “Due to the charismatic and uncompromising leadership of Bangabandhu, we got independence and subsequently the country is proceeding towards a tremendous development under the efficient leadership of his daughter Prime Minister Sheikh Hasina.”

At the outset of his speech, the President paid respect to all language martyrs as well as the Liberation War martyrs and Father of the Nation Bangabandhu Sheikh Mujibur Rahman and recalled their contributions.

President Hamid congratulated the new graduates and advised them to devote themselves in building a “Sonar Bangla” envisioned by Father of the Nation, being imbued with the spirit of patriotism.

He also urged them to build a modern developed Bangladesh with their positive works, talents, wisdom, labour and patriotism.