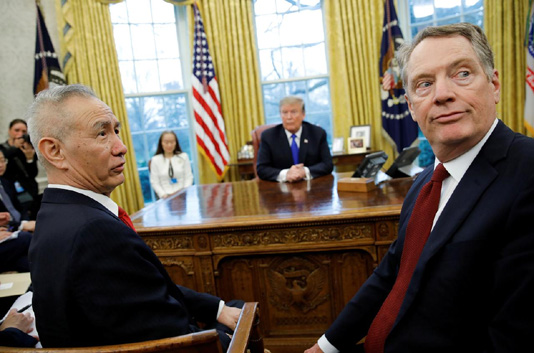 US President Donald Trump said on Sunday that he had decided to postpone increasing customs tariffs on Chinese
products due to productive American-Chinese negotiations to resolve bilateral trade disputes, he wrote on his Twitter page.

“I am pleased to report that the U.S. has made substantial progress in our
trade talks with China on important structural issues including intellectual
property protection, technology transfer, agriculture, services, currency,
and many other issues. As a result of these very productive talks, I will be
delaying the U.S. increase in tariffs now scheduled for March 1. Assuming
both sides make additional progress, we will be planning a Summit for
President Xi and myself, at Mar-a-Lago, to conclude an agreement. A very good
weekend for U.S. & China!” Trump wrote.

US Treasury Secretary Steven Mnuchin said earlier that the trade
consultations between China and the United States that began in Washington on
February 19 have been extended until Sunday.

At the beginning of December 2018, Trump and Xi Jinping at a meeting in
Argentina agreed to take measures within three months aimed at concluding a
trade agreement between the two countries. The US president said he agreed
from January 1 not to raise tariffs from 10% to 25% for Chinese products
totaling $200 bln, as he had planned earlier.