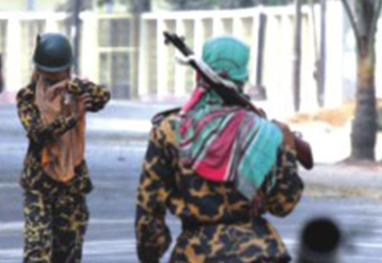 The nation today observed with a heavy heart the 10th anniversary of the February 25-26, 2009 Peelkhana carnage, in which 74 people including 57 army officers were killed, in a befitting manners.

Representatives of the President and the Prime Minister and the Home Affairs Minister, chiefs of the three services, secretary of Public Security Division of the Home Ministry, Border Guard Bangladesh (BGB) director general and family members of the martyrs laid floral wreaths at the Military Graveyard in Banani this morning, said an official release of BGB.

One-minute silence was also observed to pay respect to the martyrs and a munajat was offered seeking eternal peace of their departed souls. To mark the anniversary, the BGB, the erstwhile Bangladesh Rifles (BDR), took up an elaborate programme across the country.

Khatme Quran was held at all the regions, sectors, organisations, and units of the BGB today while Milad and doa mahfils were also held at the mosques and BOP (border observation post) of the BGB.

On February 26, special doa and milad-mahfil will be held at Philkhana Central Mosque after Asr prayer at 4.30pm. Home Minister Asaduzzaman Khan is expected to be present as the chief guest in the programme. Senior Home Secretary, Director General of BGB, close relatives of the martyrs, officers working at the Peelkhana, GCO and other employees, among others, will participate in the function.

On February 25 in 2009, several hundred BDR soldiers took up weapons against their superior officers at Darbar Hall coinciding with the “BDR Week” inside the Peelkhana headquarters and killed 57 officers including the then BDR chief Major General Shakil Ahmed.

The 36-hour-long mutiny finally ended on the next day when the mutineers were forced to lay down their weapons.

On January 23, 2011, the BDR was renamed as Border Guard Bangladesh (BGB) under a massive reconstruction drive that also included changes of the uniform, the flag and the monogram. As part of the move, a new law was made stipulating death for mutiny.

Under the subsequent actions, mutineers were exposed to trial under the BDR Act and several thousands of BDR soldiers were jailed for different periods up to seven years by some special courts.

Earlier on November 6, 2013, a Dhaka court awarded death penalty to 150 members of the erstwhile Bangladesh Rifles and two civilians for their role in the massacre of 74 people, including 57 army officers, at the BDR Peelkhana headquarters in 2009.

It sentenced 161 others, including ex-BNP lawmaker Nasiruddin Ahmed Pintu and ward-level Awami League leader Torab Ali, to life imprisonment for their involvement in the carnage. Pintu later died of disease at the jail.

The court also handed down rigorous imprisonment, ranging from three to 10 years, to another 256 people, mostly BDR jawans, in the BDR carnage case filed with the Lalbagh Police Station on February 28, 2009.

Earlier on November 27 in 2017, the High Court (HC) confirmed death for 139 out of 152 convicts who were given capital punishment by lower court in BDR carnage case.

However, the prosecution side has tried their best to complete the trial in explosive substances act regarding the Peelkhana carnage.

Out of the total convicts, three died during hearing of the appeals and death references.