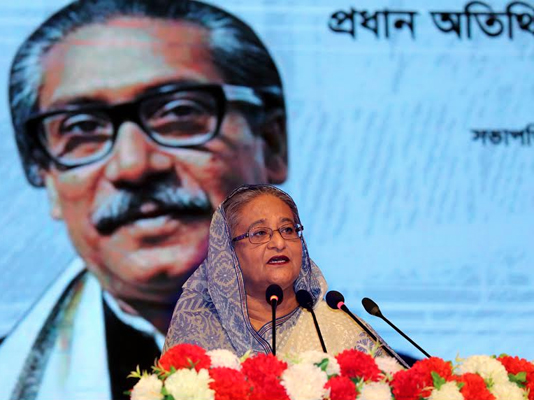 Prime Minister Sheikh Hasina today urged the Bangladeshi engineers living abroad to make contribution to the country’s ongoing development as the ‘son of the soil’.

The prime minister said NRB engineers can play role in overcoming the
policy and institutional levels challenges to expedite the country’s ongoing
development.

“Though now you are living abroad but you came from any village of
Bangladesh, which is the focal point of all our development. So, I will
request you to find your root and particularly think of your own village
development,” the premier said.

Economic Resources Division (ERD), Bridge to Bangladesh and A2I (Access to
information in Bangladesh) jointly organized the two-day convention aimed at
discussing the country’s development issues and finding ways to support to
the government at policy making and institutional levels.

The prime minister said Bangladesh is moving forward and as an independent
country, it’s a great fortune for us to take forward the country as dreamt by
the Father of the Nation Bangabandhu Sheikh Mujibur Rahman in a planned
manner.

The prime minister said her government has focused on identifying an area
for its specific development as well as the requisites to make the country
developed in overall aspects. “Pragmatic plans helped Bangladesh to emerge as
the 41st largest economy of the world and fifth fast growing nation,” she
added.

Sheikh Hasina said her government has concentrated on its efforts to
elevate the country’s growth to double digit in future and further reduce the
poverty rate.

“Country’s poverty rate dropped to 21 percent from 40 percent over the last
ten years and it has already declined further which would come to light after
the census,” the prime minister said, adding that social safety net programs
and “one-house one-farm” project are playing a big role in poverty reduction.

Sheikh Hasina said the government has taken steps for augmentation of food
production through conservation of agricultural lands and application of
modern technologies.

Bangladesh origin engineers living in around 30 different countries are
attending the conference to discuss various development issues and creating a
professional communication between the NRB engineers and different
engineering and technical field levels people in the public and private
sectors in Bangladesh.

The prime minister said Father of the Nation Bangabandhu Sheikh Mujibur
Rahman wanted to build Bangladesh as a beautiful one. But he got only three
and a half years time for rebuilding the war-ravaged country.

“The future of the nation was smashed by killing of Bangabandhu,” the
premier said.

“You are the proud souls of the nation. You have not only established
yourself by your works on foreign soils, but also shined the image of
Bangladesh around the world,” the prime minister said.

She thanked the NRB engineers for being united for the welfare of the
motherland.

Recalling the significant role of expatriates during the War of Liberation,
the prime minister said many of them extended their supports to reconstruct
the country after the war.

The prime minister said her government had given permission to establish
three banks for welfare of the expatriate people so that they can invest and
put in their efforts for country’s development through these banks.

Reiterating her commitment to ensure civic rights of every citizen, the
premier said steps were taken to provide every village with facilities of
modern town. As a part of this initiative, every household will be brought
under electricity coverage soon and internet service will also be available
everywhere, she added.

The prime minister said her government has formulated a 100-year plan
titled ‘Bangladesh Delta Plan-2100’ with a broader perspective for
sustainable development of the country.

Welcoming any plan or suggestions from the NRBs for the welfare of the
country, Sheikh Hasina said, “You invest here and also work for augmenting
foreign investments.”

The suggestions from the conventions of NRB engineers 2019 will duly be
considered and used for formulating national development policy, the premier
said.

Sheikh Hasina said Bangladesh will celebrate the birth centenary of Father of the Nation Bangabandhu Sheikh Mujibur Rahman in 2020 and the Golden Jubilee of the independence in 2021 as a hunger and poverty free nation.
Bangladesh would be middle income country by 2021 and a developed and prosperous one by 2041, she added.