PM for carrying out research on saving arable lands 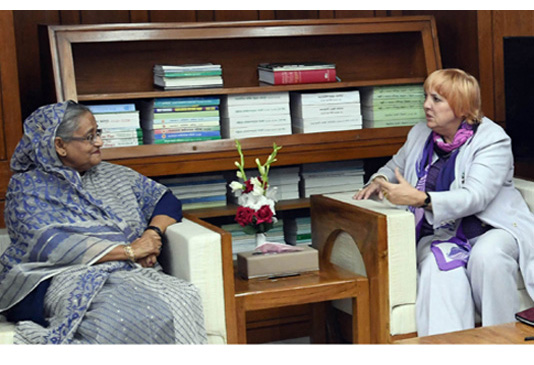 In a meeting with a delegation of German Parliament, she also sought Germany’s help in this regard.

While elaborating measures for boosting food production in the country, the prime minister said her government is giving importance to conduct more research in agriculture sector.

Due to this research, she said, the people are now getting vegetables throughout the year.

Sheikh Hasina said her government is making all development works in the country keeping in mind the possible natural disasters.

On the development in power sector, the prime minister said the country has been able to produce 20,000 megawatts of electricity thanks to various steps of her government.

“We’ve made arrangements of supplying electricity to the remote areas through solar system,” she said.

The prime minister said her government is working tirelessly to improve living condition of the people. “We are proving land to the landless people and constructing houses for the homeless,” she said.

Sheikh Hasina said the government is setting up 100 special economic zones in the country for more industrialization and generating employment.

In this connection, Sheikh Hasina said Bangladesh is becoming a victim of climate change though it is not responsible at all for it.

The German Parliamentary team thanked the prime minister for her participation in the Munich Security Confidence this month.

They highly appreciated the prime minister for her initiatives to fight climate change across the world.

While talking about the Bangladesh’s tremendous development in the last couple of years, the German Parliamentary delegation members said the people of Bangladesh once suffered a lot due to various problems.

But the miseries of the people have gone as the country witnessed massive development in all sectors in the last few years under the leadership of Prime Minister Sheikh Hasina, they said.

PM’s Principal Secretary Md Nojibur Rahman and the German Ambassador to Bangladesh were present at the meeting.

The UNICEF executive director said her organisation will continue assistance to the forcibly displaced Rohingyas.

Ms Henrietta said the UNICEF will provide support for capacity building in health sector in Bangladesh and imparting vocational training to the youths here.

The prime minister termed the UNICEF as a “good friend” of Bangladesh, saying that the organisation has been giving assistance to Bangladesh since its independence.

She hoped that the UN body will continue support for Bangladesh’s development in future.