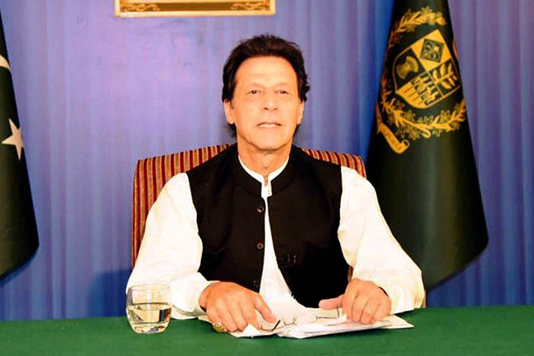 Pakistan’s Prime Minister Imran Khan called for talks with India Wednesday and warned of a catastrophe should the
conflict between the nuclear-armed rivals continue to escalate.

“Can we afford any miscalculation with the kind of weapons that we have
and you have?” he said in a televised statement after both sides said they
had shot down each other’s warplanes.

“I once again invite India to come to the negotiating table,” said Khan,
who has called for dialogue with New Delhi in the past.

“Better sense should prevail,” he added, before alluding to the nuclear
arsenal of both South Asian countries.

“If escalation begins from here, where will it go?”

Khan also repeated the military’s earlier statement that it had shot down
two Indian Air Force planes, which sent tensions spiralling on Wednesday,
fuelling fears of a fresh conflict between India and Pakistan.

“Today we shot down two Indian MiGs which crossed our border,” he said,
adding: “Pilots are with us”.

India has said that just one of its planes was shot down, but that it also shot down a Pakistani fighter jet in air battles over the disputed Himalayan territory of Kashmir. The Pakistani military has denied that any of its planes were downed.