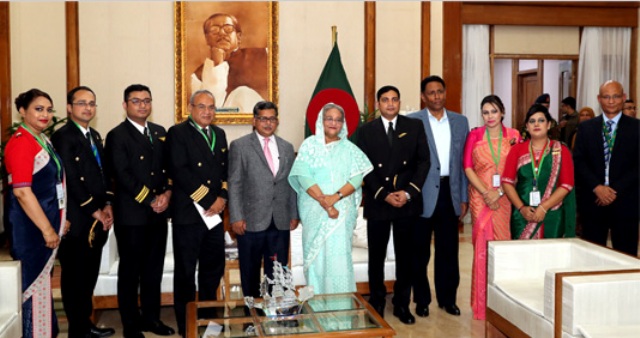 Prime Minister Sheikh Hasina today appreciated the “courage, intelligence and prudence” of a Biman aircraft pilots and crew which was exposed to a hijack threat on Feb 24.

“You’ve showed huge courage, intelligence and prudence,” she told the
pilots and crew of the Biman aircraft that made an emergency landing in
Chattagram Shah Amanat International Airport as one of the passengers emerged
as a hijacker.

The premier called them “heroes” saying that they successfully thwarted
the hijack bid of the BG-147 aircraft.

The Dubai-bound Boeing 737-800 aircraft made an emergency landing at the
Chattogram airport at 5:41pm on Sunday after a youth named Polash Ahmed
allegedly attempted to hijack the plane.

He was killed later in an eight-minute operation by military para-
commandos.