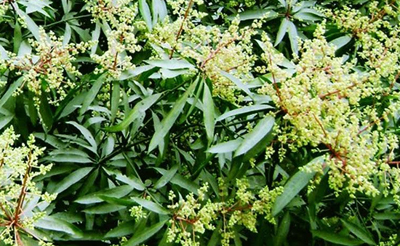 The farmers are happy witnessing massive sprouting in their mango trees with the advent of the spring after the departure of the winter in all five districts of Rangpur agriculture region.

The mango orchards and gardens have already worn an eye-catching look with huge flowers in mango trees amid favourable climatic condition signaling superb growth of the tender fruit in the upcoming season.

“Around 85 percent of mango trees have already bloomed with a possibility of 95 percent sprouting by the first week of March next,” said Khondker Md Mesbahul Islam, horticulture specialist of the Department of Agriculture Extension (DAE) at its regional office.

The process of sprouting in mango trees started little late this year following comparatively longer winter and foggy weather as the climatic condition remains suitable now for the process.

“Mango cultivation is expanding every year in the region as farmers are showing keen interest on commercial basis farming of the popular fruit after getting repeated bumper production with lucrative price in the recent years,” Islam added.

“The farmers have brought 7,250 hectares of land under mango cultivation during the current 2018-2019 fiscal and massive blooming amid favourable climatic condition predicts brighter prospect of mango yield this time,” Islam said.

Islam suggested the farmers for proper nursing of their orchards and gardens and controlling possible attacks by pests like mealy bug with temperature rise at this stage, or later by weevil, mango hopper and fruit fly during fruit formation period for better production.

“The farmers can spray pesticides as per suggestion of field level agriculture officials at the recommended dose to growing mangoes sometime later if the temperature rises or during the fruit formation process,” Islam added.

Besides, Islam suggested the farmers for spraying fungicides, if necessary, at the recommended doses during the fruit formation period for better growth of tender mangoes and to get better size and production.

Talking to BSS, Deputy Director of the DAE at its regional office Md Moniruzzaman said farmers have already started taking extensive preparations, care and measure so that mangoes could grow in huge quantity to earn their desired profits.

Moniruzzaman suggested the farmers to contact field level agriculture officials and control attacks by hoppers and other pests on mango flowers or growing tender mangoes for better yield of the fruit.

“If the climatic condition, fluctuation in temperatures, rainfall, attack by pests and insects and seasonal nor’westers remained within the tolerable limits, formation of mango would be excellent yielding bumper mango output this season,” Moniruzzaman predicted.