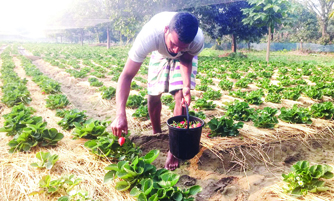 Kawsar Habib, 32, has brought economic emancipation in his life through strawberry farming which has also enhanced his level of confidence to a greater extent.

Habib, a resident of Kalupur village under Shibganj upazila in Chapai
Nawabganj district, is now very much hopeful of making profit worth around
Taka five to six lakh this season. “I have spent around Taka six lakh for
cultivating the cash crop on six bigha of land,” said Habib while talking to
BSS here Wednesday.

Seven people work in his field as regular in addition to seven to eight
others as casual workers. Sadrul Islam, 42, who used to work as assistant of
a truck driver couple of years ago, has now become a successful strawberry
farmer. He says strawberry farming is profitable than many other crops. But
this farming needs additional labour and care.

Abul Kalam, a farmer of Darusha village under Paba upazila, said
strawberry, a succulent fruit popular in different parts of the globe, is
also gradually becoming popular among the local people.

Habib, Islam and Kalam are among many others who have built their fortune
through strawberry farming in the area.

Md Aminuzzaman, Upazila Agriculture Officer, says strawberry was
cultivated on more than 70 bighs of lands in the upazila this season.
Harvesting begins in January and continues till March. But the farmers get
maximum yield in February. Normally, a farmer can get 1,500 to 2,000
kilograms yield from one bigha of land.

He added that the strawberry farming has gained popularity not only in
Shibganj but also everywhere in Rajshahi region for economic prospect of the
cash crop.

Farmers’ level extension of strawberry farming can bring a new horizon to
the agriculture sector in the region.

Prof Dr Manzur Hossain of Department of Botany in Rajshahi University, who
is a pioneer in the country’s strawberry research, variety innovation and
growers’ level farming expansion, said Bangladeshi strawberry variety has
been adjudged as the world’s best strawberry.

“We have innovated three varieties of strawberry through applying tissue
culture method,” he said.

“In the demonstration field, all those were found adaptive to the region’s
soil and environmental conditions,” Prof Dr Hossain, added.

He has been multiplying the variety on his own horticulture farm for the
last couple of years. The new variety of strawberry can be harvested within
two and a half months of its plantation and a farmer can earn around Taka 1.5
lakh by farming it on one bigha of land with expenditure of only Taka 30,000,
he said.

“Each plant bears around 250 to 300 grams of fruit and some 6,000 plants
can be grown on one bigha of land,” Dr Hossain said, adding with farmer-level
price of around Taka 800-1,000 per kg, the commercially potential fruit will
have a bigger market locally and globally and benefit farmers enormously.

Now, a large number of people, mostly unemployed youths, have become
dependent on strawberry farming to earn a living, as its cultivation is
easier and more profitable than other crops, he said.

The youths are supplying strawberry to different markets across the
country as the soft fruit is being used in preparing ice-cream, jam, jelly,
pickles, chocolates and biscuits.

ATM Rafiqul Islam, Deputy Manager (Agriculture) of Barind Multipurpose
Development Authority, said there has been a bright prospect of farming
strawberry everywhere in the country excepting the coastal districts.

The red juicy and nutritious fruit produced by him is now being supplied to
posh markets in the capital Dhaka.

The country can earn huge foreign currencies from strawberry export if its
commercial farming starts at national level, he hoped.

“The fruit will no doubt be a profitable crop for farmers. If it is grown on a large scale, the highly nutritious fruit will come within the reach of the common people. There will be no need for imports,” said Agriculturist Rafique.