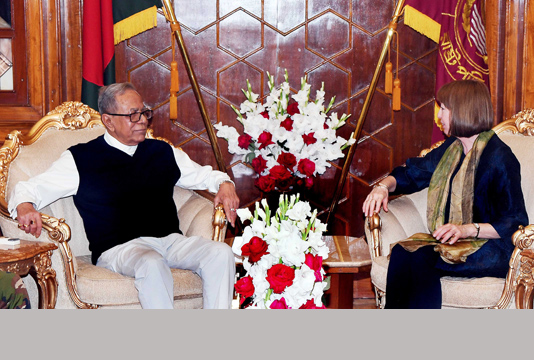 President M Abdul Hamid today sought continued cooperation and stronger role of the United Kingdom to ensure a safe and dignified repatriation of the Rohingyas as outgoing UK High Commissioner to Bangladesh Alison Blake called on him at Bangabhan here this afternoon.

Lauding the assistances provided earlier by the UK soon after the Rohingya influx here, the President urged the UK government to be more vocal in different international forums to send them back in dignified manner.

Referring to the long-standing and historic relations between Bangladesh and the UK, especially during the historic 1971 Liberation War, the President said around six lakh non-resident Bangladeshis (NRB) in the UK are now playing a very important role for the socio-economic development of the two countries.

The head of the state hoped that the ongoing development trend in different sectors, including commerce and investment, would continue in days to come.

The British high commissioner expressed her gratefulness to the President for providing all-out cooperation during her assignment in Bangladesh.

Expressing satisfaction over the existing relations between the two countries, she highly appreciated Bangladesh’s ongoing socio-economic development trend in line with the Vision 2021 and Vision 2041 of the government.

The UK envoy said the Rohingya issue is a big problem for Bangladesh. She assured of standing beside Bangladesh to end the crisis.

Secretaries concerned to the President and foreign ministry officials were also present there.