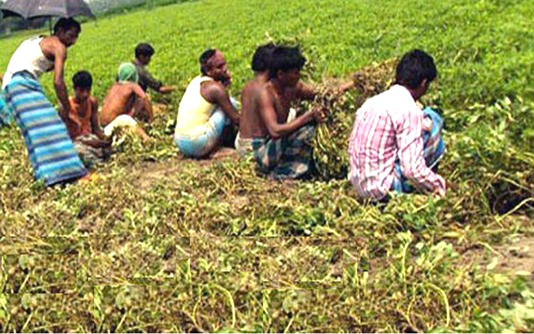 Experts of the Department of Agriculture Extension (DAE) are expecting a super bumper output of groundnut after
farmers exceeded its fixed farming target by 7.53 percent in Rangpur agriculture region this season.

“A target of producing 9,325 tonnes of groundnut from 5,298 hectares of land was fixed for all five districts in the region during this Rabi season,” said Horticulture Specialist of DAE at its regional office here Agriculturist Khondker Md Mesbahul Islam.

However, farmers have cultivated groundnut on 5,697 hectares of land exceeding the fixed farming target by 399 hectares or 7.53 percent this time.

He said farmers are expected to harvest over 10,000 tonnes groundnut to exceed the fixed production target of 9,325 tonnes by 675 tonnes of the cash crop as its tender plants are growing superbly now predicting super bumper output.

“Groundnut cultivation has become a profitable venture inspiring farmers to expand its farming both on mainland and char areas after they got repeated bumper output with lucrative price in recent years,” he said.

“The farmers are getting 1.35 to 1.95 tonnes of groundnut yield per hectare following expanded cultivation of the BRRI-evolved high yielding varieties of the crop having increasing demand in local markets,” Moniruzzaman added.

Talking to BSS, Rangpur Regional Additional Director of the DAE
Agriculturist Md. Shah Alam predicted bumper production of groundnut this
time saying that harvest of the crop will begin from the next month.

“Many farmers have improved their livelihoods as well as fortune through farming groundnut twice annually during the Rabi and Kharif-1 seasons in the region in recent years,” Alam added.