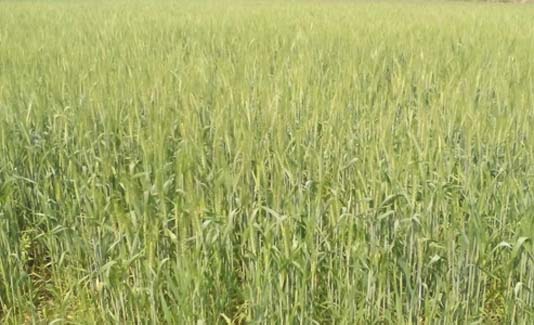 Farmers and field level agricultural extension and research officials are now very much hopeful about the upcoming
wheat yield in the region including its vast Barind tract. Talking to BSS here many of them mentioned that the prevailing suitable climatic condition has made them inspired and hopeful about wheat yield.

“We are very much optimistic that we are going to get a bumper wheat yield in the upcoming harvesting season,” Yeasin Ali, a farmer of Naohata village under Paba Upazila, said while talking to BSS here on Thursday.

He said the present weather coupled with topographic condition is supportive for the cash crop. Taking advantages of the natural privileges the farmers brought more lands under cultivation of the cereal crop as well as staple food. In the wheat-growing areas the farmers are now busy in nursing and caring the farming fields.

Golam Mostofa, 48, a farmer of Panchandar village under Tanore Upazila,
is now happy over witnessing the wheat growing field. He attributed that
timely sowing of seeds accompanied by the cold spell, has been considered as
a positive sign for attaining a bumper production of the cash crop.

The Department of Agriculture Extension (DAE) has set a target of
producing around 4,39,485 metric tonnes of wheat from around 1,33,753
hectares of land in all eight districts under Rajshahi division. Whereas, the
farmers have cultivated wheat on 1,37,308 hectares of land creating scope of
yielding more than 4,51,166 metric tons this season.

“We have adequate preparations and all the field level officials and
staff concerned are working relentlessly to make the wheat farming a total
success,” said SM Mustafizur Rahman, additional director of DAE, while
talking to BSS here on Thursday.

He said farmers of the Barind area were found more confident in wheat
farming on more new lands, due to the water-stress condition, as wheat is a
less-water consuming plant.

Wheat Research Center has so far released 24 wheat varieties and some
other time-fitting technologies for commercial cultivation.

Wheat plays an important role in ensuring food security as its
consumption is increasing day by day. But, Bangladesh produces hardly 10 lakh
metric tonnes of wheat against the demand of around 40 lakh tonnes annually,
he stated.

Agriculturist Amin, however, said that Rajshahi division contributes 35
percent of the total area and 44 percent of the total production. Not only
that, there are around 50,000 hectares of more rain fed land in the high
Barind area and there has been a bright prospect of bringing the huge land
under wheat cultivation.

Large scale wheat production is very important for ensuring food
security as it is the second most important cereal in the country after rice
and plays a vital role in the national food security, he added.

Agriculturist Rafique viewed time has come to enhance acreage of wheat
farming instead of only depending on Irri-Boro rice in the dried area to
ensure food security amid the adverse impact of climate change.

Apart from this, he said that seven to eight bighas of wheat could be
cultivated with the irrigated water of only one bigha of Boro rice through
soil moisture utilization and best use of modern technologies.

More support from international research organizations including CIMMYT has become necessary for germ-plasm especially heat-tolerant variety adoption together with yield gap minimization in the farmers field.