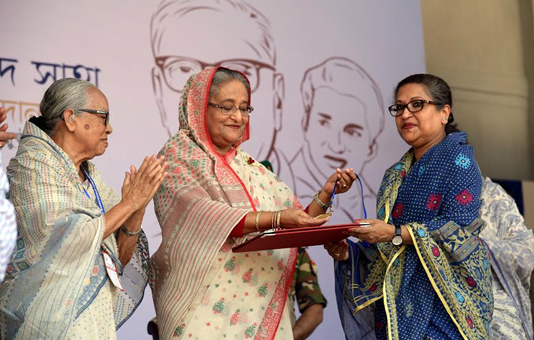 Prime Minister Sheikh Hasina distributed the gold medal among the recipients and their representatives on Kumudini Complex in Mirzapore, Tangail while opening the 86 years celebration function of Kumudini Welfare Trust services as the chief guest.

Sheikh Rehana, younger daughter of Father of the Nation Bangabandhu Sheikh Mujibur Rahman, was present as the special guest at the function.

On behalf of Suhrawardy, Sheikh Rehana received the gold medal from the premier, while Khilkhil Kazi, a granddaughter of Poet Nazrul, received the medal on behalf of the National Poet.

On her arrival at the Kumudini Complex helipad in Mirzapore by an Air Force helicopter this morning, the prime minister was given a guard of honour by the district police.

In honour of the prime minister, the students of the Bharateswari Homes staged colorful display and cultural function.

To welcome the prime minister, Kumudini Complex has been colorfully decorated.

RP Shaha donated all his wealth to the country and the people.

During the Liberation War, RP Shaha and his only son Bhabani Prasad Shaha were picked up from their home by the Pakistani army and their collaborators on May 7 in 1971 and brutally killed by them.

Kumudini family introduced the “Danveer Ranada Prasad Shaha Gold Medal” in 2015 in memory of the philanthropist.

The premier earlier this morning inaugurated and laid foundation stones of 31 development projects in the district by unveiling their plaques from the Kumudini Complex.

In the afternoon, she will exchange views with senior government officials of the district at the same place, the sources added.

Concluding her visit to Tangail, the premier is expected to return to the capital in the afternoon.

Director (education) of the trust and 1952 language veteran, Protiva Mutsuddi presided over the function while its Chairman and Managing Director Razib Prasad Shaha also spoke at the ceremony.

Another director of the trust Srimoti Shaha delivered the welcome address, while local parliament member Ekabbar Hossain was present on the dais.

Video presentations regarding brief life-sketch of RP Shaha, and the recipients of ‘RP Shaha Smarak Gold Medal’ and also 86 years of journey of Kumudini Welfare Trust were also screened at the function.