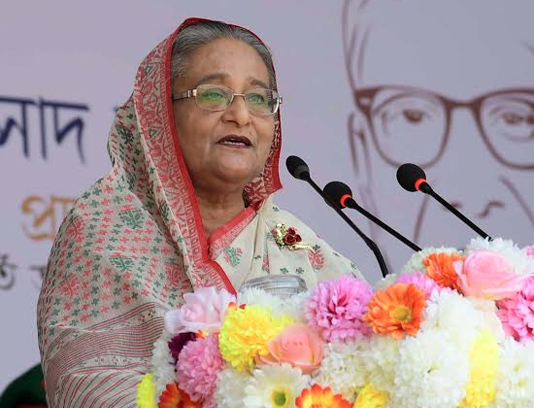 “Ranada Prasad Shaha set an example in serving the human being,” she told the medal awarding ceremony at the green lawn of Kumudini Complex at Mirzapore here this afternoon.

The premier added: “Many rich people are there in our country (and) if they follow his footsteps, the ordinary people would not have any sufferings.”

Sheikh Hasina particularly appreciated with respect the enormous philanthropic activities of Shaha, more known as RP Shaha, in Mirzapore what was visibly a remote area during his time.

On behalf of Suhrawardy, Father of the Nation Bangabandhu Sheikh Mujibur Rahman’s younger daughter Sheikh Rehana received the gold medal from the premier while she herself joined the ceremony as a special guest.

Professor Rafiqul Islam and painter Sahabuddin Ahmed received themselves the award the medal from the premier.

A businessman by background Shaha earned the repute of being a leading Bengali philanthropist and founded educational institutes like Bharateswari Homes, Kumudini College and Debendra College.

Pakistani occupation forces had picked him up during the Liberation War while he never returned home.

“He had earned money in one hand and donated it on the other hand” led by his feelings for the people in miseries, distressed widows and concern for women education, the premier said.

Sheikh Hasina said her door would always remain open for the Kumudini Welfare Trust in their endavour to serve the cause the nation’s wellbeing.

Director (education) of the trust and 1952 language veteran, Protiva Mutsuddi presided over the function while its Chairman and Managing Director Razib Prasad Shaha also spoke at the ceremony.

Another director of the trust Srimoti Shaha delivered the welcome address, while local parliament member Ekabbar Hossain was present on the dais.

A documentary on 86 years’ journey of the Kumudini Welfare Trust was screened at the function the Bharateswari Homes students staged a spectacular physical display.

In this context, she said that Rashid Suhrawardy, the only son of Huseyn Shaheed Suhrawardy, became very happy hearing his father’s nomination for the gold medal and expressed his desire to receive it personally.

“It was a matter of sorrow that Rashid Suhrawardy died a few days back,” she said.

Recalling her first visit to Kumudini, the premier said, “I came here probably in 56 or 57 with my father (Bangabandhu Sheikh Mujibur Rahman) and mother (Bangamata Begum Fazilatunnesa).”

“While visiting the place, Bangabandhu became overwhelmed to see the scenario of the area and expressed his desire to get me admitted to Kumudini.

But, it wasn’t possible as my father was arrested soon after declaration of the martial law in 1958,” she continued.

She mentioned that she was emotionally touched with the memory of RP Shaha’s family, saying, “Bijoya aunty (eldest daughter of RP Shaha) came to our house with cooked foods after assassination of the Father of the Nation and most of his family members on August 15 in 1975.”

She also recalled her visit to the old Dhaka’s Sadarghat residence of RP Shaha.

Remembering the killings of RP Shaha and his son Bhabani Prasad Shaha by Pakistani occupation forces on May 7 during the War of Liberation in 1971, the premier said she knew the agony of loosing near and dear ones, as she lost most of her family members including father, mother and brothers (except herself and her sister Sheikh Hasina) on August 15 in 1975.

But, she reiterated her firm commitment to build Bangladesh as a developed and prosperous country by freeing it from hunger and poverty, saying, “I will be the happiest person at that moment when I will be able to complete the unfinished tasks of my father by building a ‘Sonar Bangladesh’ as dreamt by him.”

Earlier in the morning, Prime Minister Sheikh Hasina opened 14 development projects and laid the foundation stones of 17 other schemes by unveiling their plaques from Kumudini omplex here.