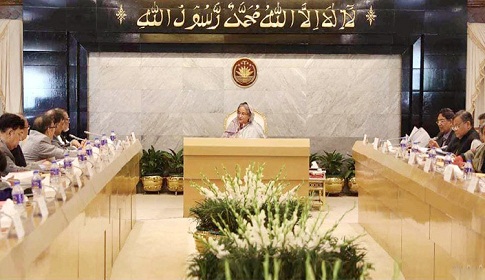 The cabinet today in principle approved a draft law enhancing jail terms for adulterated fish production and marketing from three months to two years in its weekly meeting with Prime Minister Sheikh Hasina in the chair.

“The cabinet today in principle approved the draft of Fish and Fish
Products (Inspection and Quality Control) Act, 2019 to strengthen monitoring to ensure quality of the fish at production and marketing levels, preventing adulteration,” Cabinet Secretary Mohammad Shafiul Alam told a news briefing.

The meeting was held in PMO while the cabinet secretary made the briefing at the Bangladesh Secretariat where he said under the proposed law one would now face jail terms up to two years which was only three months in the law being amended.

Alam said the country’s image was being tarnished as well as vested
quarters often export fish by injecting water, starch and jelly into it.

“The new law would stop adulteration help maintain quality of fish and fish products,” he said.

At the beginning of the meeting at the PMO, a book titled “Bangla Bashar Bangabandhu”, an edition of writings in Bengali on Bangabandhu’s contribution to the 1952 Language Movement and promotion of the mother tongue by almost all the famous personalities was handed over to Prime Minister Sheikh Hasina.

The premier unveiled the book’s cover designed under Liberation War Affairs Ministry’s supervision with Journey Publication being its publisher.

The act translated into Bengali as per the directive of the Supreme Court and no major changes are made in the law, he said.

The quality of fish and fish products in production and marketing was so far being conducted in line with the Fish and Fish Products (Inspection and Quality Control) Ordinance, 1983.

The cabinet secretary said the proposed law simultaneously enhanced the amount of fine Taka 3000 to Tk 500,000 for production of adulterated fish and fish products and their marketing.

The punishment would be doubled in case of repeating identical offense, which means, one would be punishable with four years imprisonment.

The law simultaneously kept a provision of “administrative punishment” under which one could be fined up to Taka five lakh for fish adulteration using any harmful ingredient in producing or preserving the fishes.

Alam said the new prescribed a mandatory provision which would obligate all fish firms to obtain registration and take health certificate from concerned authorities for fish trading including exports.

The firms, he said, simultaneously would have to appoint Quality Assurance Managers for their enterprises.

The definition of ‘fish’ has been updated considering its international perspective.

He said the other than the renaming of the law, the proposed legislation made no major change but added a provision to nominate an representative from Bangladesh Council for Scientific and Industrial Research (BCSIR).

The words, Port Lighthouse Authority, have been added in the ‘Bangladesh Lighthouse Act, 2019’, he said.

The cabinet congratulated Sheikh Hasina for winning ‘Lifetime Contribution for Women Empowerment Award’ by Institute of South Asian Women (ISAW) for her outstanding contribution to the field of women empowerment as well as her dynamic leadership in South Asian region, Alam said.

It also took a condolence motion for the twin mosque terror attacks at Christchurch in New Zealand in which 50 people including five Bangladeshis were killed.