President for engineers’ due role in sustainable development 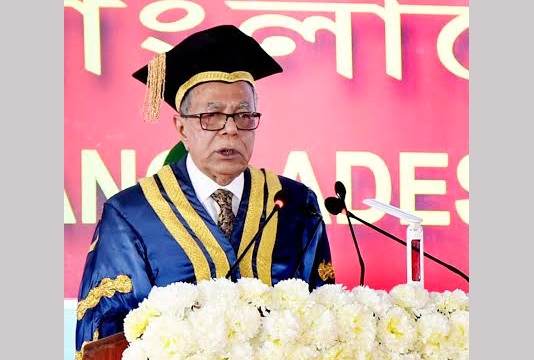 “Prime Minister Sheikh Hasina has undertaken the development plans Vision 2021 and Vision 2041 to materialize the dream of independence . . . Engineers and technologists will have to play their due role to make development works people-friendly and sustainable,” the president said at the 11th convocation of Bangladesh University of Engineering and Technology (BUET) here.

The President, also the chancellor of the university, said a war-ravaged country in the meantime got the status of a developing one because of its brave people’s relentless efforts and government’s time-befitting strategies.

Terming the BUET as the country’s highest seat of engineering and technical education, he hoped that the graduates of the university would contribute more to engineering education and research works upholding the demand of time.

The head of the state attached importance to halting ‘brain drain’ from the country as a huge number of engineers, technologists, architects and planners go to Europe and America for higher studies but many of them do not return.

He urged them to contribute more to the welfare of the country and its people.

Congratulating the new graduates, the president expressed his hope that they would put in their all-out efforts using talents and creativity to turn Bangladesh into a developed and prosperous country by 2041.

President Hamid advised the students to be readied always to perform their respective duties and not to forget this motherland wherever they stay for jobs across the world.

“Always dream to become great. . . and that would be only for the welfare of the country, nation, society, family and yourself,” the President said.

Abdul Hamid urged the newly BUET graduates not to compromise with any untruth and do everything by applying their respective talents, honesty and dedication.

He mentioned the successful launching of the Bangabandhu Satellite-1 and said the government is implementing various projects, including multipurpose Padma Bridge, different power plants, Payra Sea Port, Dhaka Metrorail, elevated expressway. “The BUET engineers must play a significant role in this regard,” he said.

Abdul Hamid asked the engineers to contribute to implementing the “Bangladesh Delta-Plan 2100” as part of a long-term development plan of the incumbent government to mitigate the climate change effects like natural calamities including flood, river erosion, river management, water supply and sewerage management and water logging.

He said BUET is well known to international arena for its graduates’ outstanding performance both at home and abroad and this esteemed institution has already produced over 32,000 engineers, architects and planners in the country.

During the convocation, 5,284 students of academic years from January 1, 2011 to December 31, 2018 got graduate, postgraduate and PhD degrees from various disciplines of engineering. Eighteen students were given Gold Medals for scoring highest marks in their respective years.